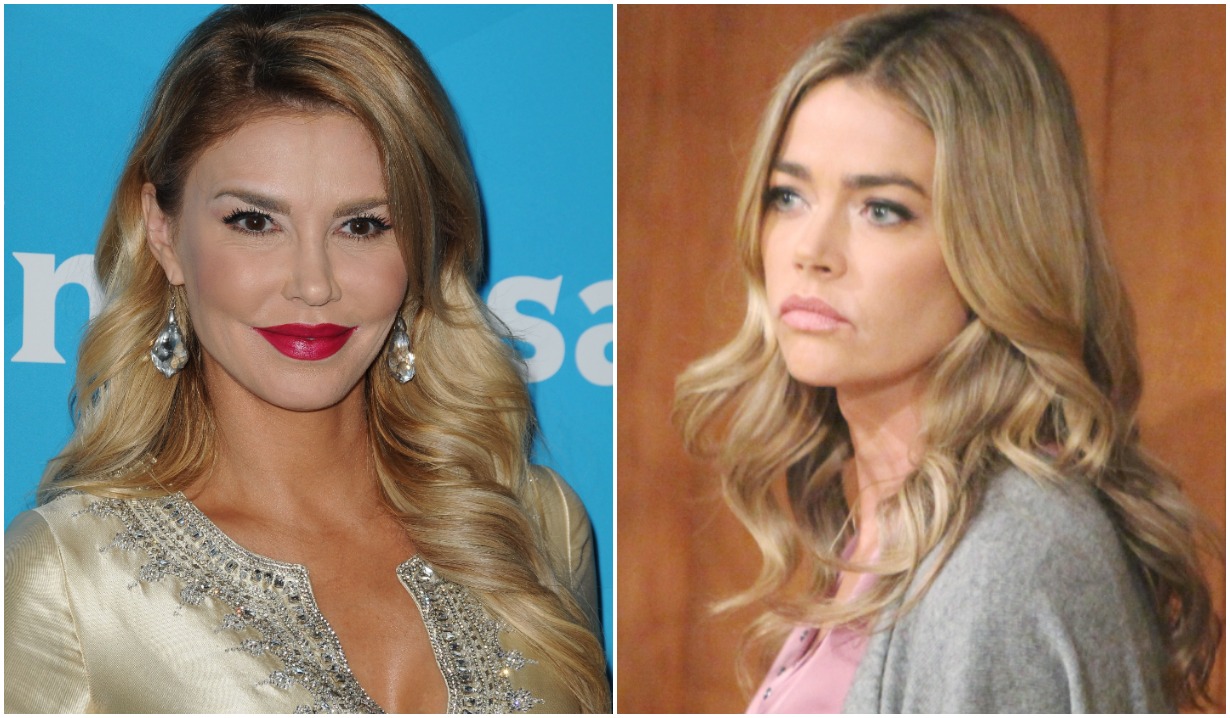 The fit hit the shan in Wednesday’s episode of The Real Housewives of Beverly Hills.

Anyone who’s ever read a tabloid or skimmed TMZ knows that Brandi Glanville is not a fan of adultery. As the former Mrs. Eddie Cibrian (ex-Matt, The Young and the Restless) said in Wednesday’s The Real Housewives of Beverly Hills, “the whole cheating thing with me is so personal. I was so broken for so long… so I would never, ever do that to someone else.”

Yet it seems that she might have — and, according to her, it was RHOBH castmate Denise Richards (Shauna, The Bold and the Beautiful) who “kind of put me in a situation where I was the cheater.”

What the whaaat? “I had been out with her and Aaron [Phypers, her husband],” Glanville told her pals, “and like, I knew that they have an understanding. Like, she could be with girls if she wanted to… as long as, you know, it wasn’t with a guy.”

“The first night we met,” she continued, “something happened.”

Over dinner, Glanville and Richards apparently enjoyed one another’s company a lot. They also enjoyed a whole lot to drink. “We got absolutely wasted,” Glanville said. “We go to the restroom, and all of a sudden, we’re completely making out.”

Another evening, per Glanville, she and Richards went further. Not to sound all seventh-grade or anything, but all-the-way further. Glanville maintained that she never would’ve gone there with Richards had she thought that it might upset her better half. “There was no question in my mind,” Glanville insisted, “that Aaron was OK with all of this.”

Her mind was soon changed. Afterwards, said Glanville, Richards “made me believe that I’d done something wrong” — and insisted that Phypers be kept in the dark.

RHOBH co-star Kyle Richards, for one, believes not only Glanville’s account of her alleged tryst with Richards but her recounting of its aftermath. “Brandi can be a lot of things,” said Richards. “She can be mean, she can be a bitch, but I honestly don’t believe she’s a liar.”

According to People, Richards has denied that she slept with Glanville. Richards also told The Talk, “I know my truth, my husband does — it is what it is.”

And what it is… isn’t going to faze her in the slightest. “I’ve had so much stuff said over the years about me and my family,” she shrugged, “and this is like nothing compared to some of the things that have been said.”

Apparently, the plot will only thicken next week, when the whole story gets rehashed — with Richards — in Italy. Now then, if this has all whet your appetite for gossip, you’ll definitely want to scroll down and enjoy the below photo gallery, which reviews some of the biggest scandals ever to rock daytime.

Stassi Schroeder Admits She Can Only Wear Maternity Jeans 7 Wks. After Giving Birth: I Thought It’d Be ‘Easier’