Rate The Bold and the Beautiful’s Return: Hit or Miss? — Plus, *Our* Take on What Worked and What Didn’t 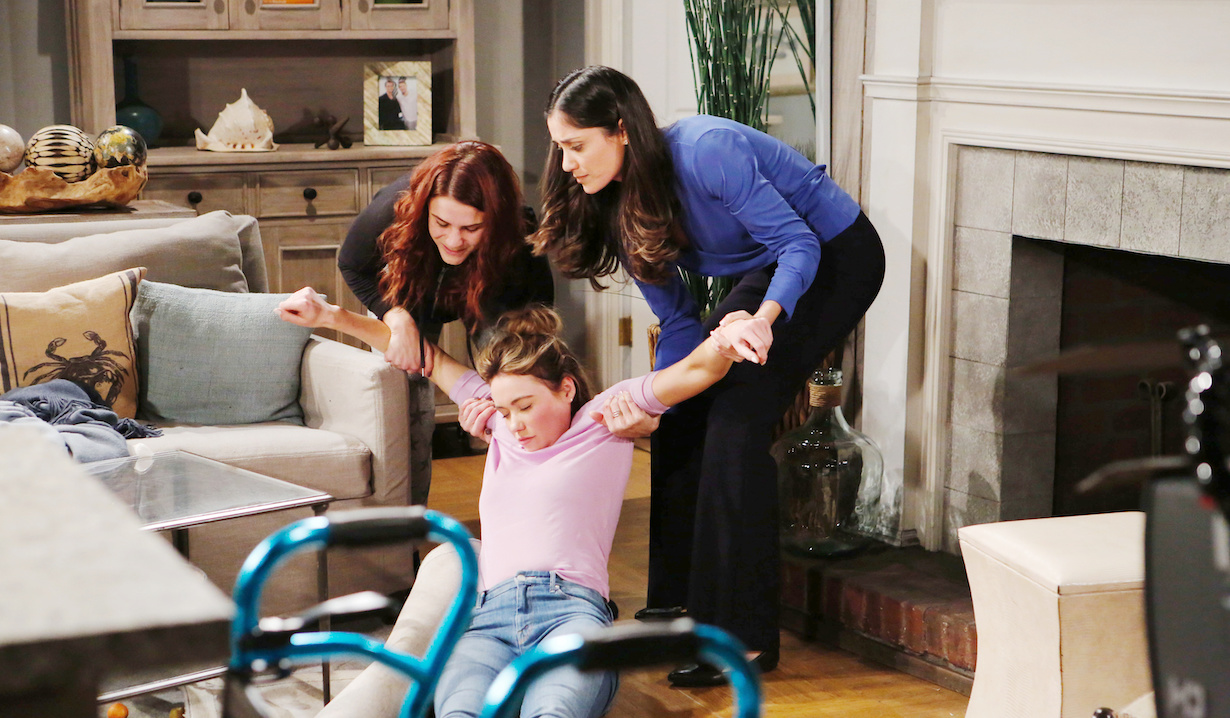 Read our take, then hit the poll and the comments to give us yours!

When last we saw The Bold and the Beautiful’s Wyatt, we’d been left to wonder whether he’d just uncovered wannabe-girlfriend Sally’s shocking secret. After all, she and reluctant partner in crime Penny had conked Flo over the head in order to keep the blonde from blabbing that Sally’s “terminal illness” was not only unnamed but nonexistent. It was a pretty killer cliffhanger, which today… went unresolved.

According to spoilers, we’ll pick that very big plot point up in Tuesday’s episode, but what we got in today’s — the first new outing to air in three months — was a whole lot of flashbacks designed to catch us up on recent events, with newly-shot footage serving as a framing device.

Truth be told, what could have felt like a waste of time turned out to be a lot of fun. The show got our attention right from the start, using a “digital campaign” Katie had created announcing the reopening of the Forrester boutique to wink at the audience as she declared, “The wait is over!”

In newly-filmed scenes, Carter admitted to Katie he’d been out of the loop for a while, setting the stage for her to give him the scoop on recent events while we relived highlights via well-curated clips from past episodes. Only if one were really stopping to think about it would a viewer realize that Katie and Carter were perhaps sitting unnaturally far apart, with the massive table which has long anchored the Forrester CEO office separating them.

Later, it was Zoe’s turn to fill Carter in on her ill-fated wedding to Thomas. Although the newly-taped scenes were short, they were well-scripted and left us digging the chemistry between Forrester’s attorney and top model, and even teased their potential pairing down the line. (In case you missed our complete recap, it’s a must-read!)

Sure, some of the flashbacks we saw didn’t really work within the context of a framing device. If we were seeing events through Katie’s eyes, for example, how were we witnessing private moments between Shauna and Ridge, let alone any of the scheming done by Penny and Sally?

Could The Bold and the Beautiful have achieved the same goal by simply throwing together an episode-topping “Previously on… ” segment? Sure. And given how likely it is that new viewers tuned in to the much-hyped return, it may have been wiser to hit the ground running with an episode designed to hook the curious looky-loos. But by the time we got that spoileriffic teaser at the end (Shauna and Ridge are married?!?), we were psyched for what’s coming in the days ahead and, hopefully, so were new viewers!

Now that you’ve read our two cents, let’s hear what you have to say! Take the poll below, and then elaborate on your thoughts in the comments. Once you’ve done that, join us as we stroll down Memory Lane and reflect fondly on some past characters we’d love to see return to The Bold and the Beautiful!

The Bold and the Beautiful Cast...

Willie Garson, From Sex and the City and White Collar, Dead at 57