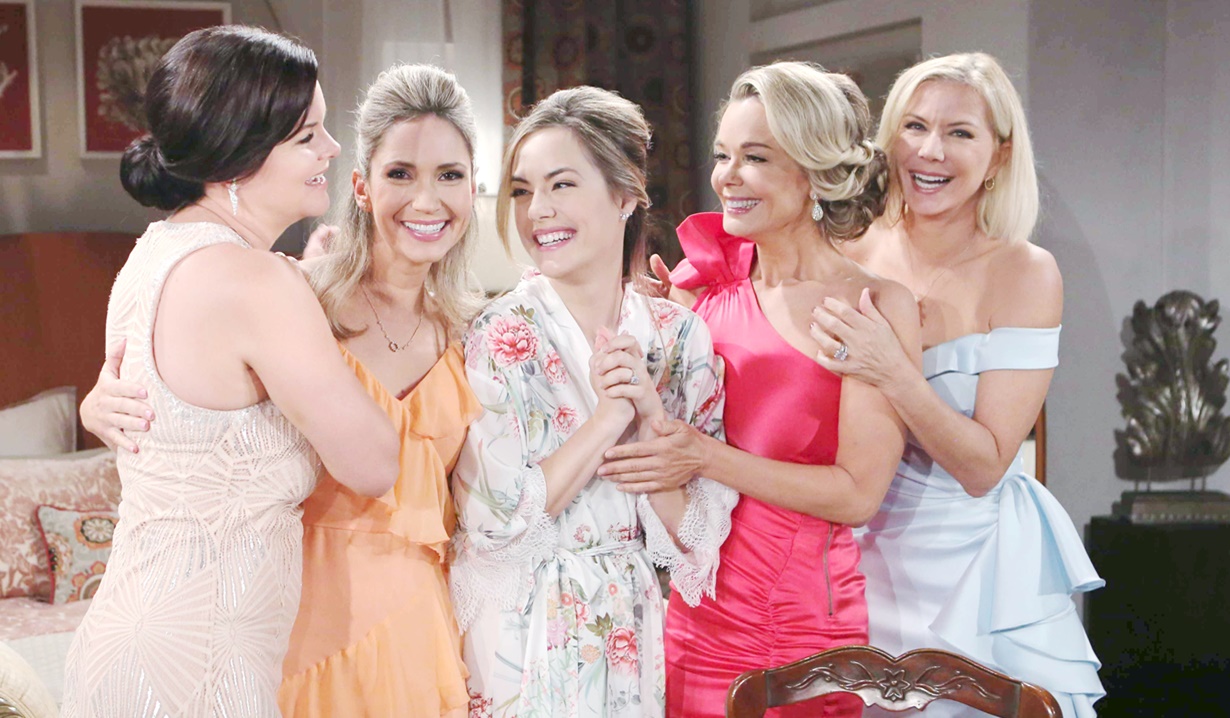 The Logans’ influence on the Forresters, fashion, and family.

The Forresters might be the first family of The Bold and the Beautiful, but the Logans have had just as big of an impact. Since the soap opera’s inception in 1987, the family, introduced as caterers to a Forrester family party, has become formidable in their own right. Most of them have even been involved with the Forresters, either personally or professionally.

From the “slut from the valley,” as her nemesis Stephanie Forrester liked to call her, to wife, mother, and businesswoman, Brooke Logan is her family tree’s true head. She might have parents who were involved with the Forresters before her, but Brooke has been the Logans’ driving force. Giving birth to the next generation of Logans, as well as Forresters, Brooke often battled her sisters and even daughters for the attentions of a man.

Brooke’s sisters, Katie and Donna, also furthered their bloodline with a Spencer and a Walton, respectively, while their brother, Storm, made his own shocking contribution. As for the next generation of Logans, Brooke and Donna’s children have entered into love triangles, business dealings, and families of their own, while Katie’s son is still a bit too young. With Bill Spencer’s and Katie Logan’s genes, though, we have high hopes for him.

Look through our photo gallery below of the Logan Family tree, which details all the ways the Logan family branches have intertwined with the Forresters, and more families, on The Bold and the Beautiful. Get the latest news delivered to your inbox by signing up for Soaps.com’s newsletter.

<p>The patriarch of the Logan family, Stephen, was absent for much of his children’s lives. He left his family after feeling inferior to his wife Beth’s ex-love Eric Forrester. Stephen reconnected with them when his children were adults and even reunited with Beth. However, she was unaware that Stephanie Forrester arranged Stephen’s return to keep Beth away from her husband, Eric. Stephen also accepted money from Massimo Marone to keep his daughter Brooke away from Stephanie’s son Ridge Forrester. Stephen overcame those missteps, though, and went on to take care of Beth when she was diagnosed with dementia. In addition to Beth, Stephen romanced Taylor Hamilton Forrester and Jackie Marone. He even fell in love with Pam Douglas after using her to avenge Stephanie’s perceived role in Beth’s death. They didn’t last, though, and Stephen moved to Dallas.</p>

<p>A young Beth Logan married Stephen Logan after Eric Forrester left her for a pregnant Stephanie Douglas. She would run into Eric again years later while working as a caterer at one of his parties. She went back and forth between Eric and Stephen for a while until she was diagnosed with Alzheimer’s disease. She remained close with her children until her death, which occurred after an argument with Stephanie landed her in the pool. As a result of her condition she forgot how to swim and drowned.</p>

<p>Stephen “Storm” Logan Jr. was Beth and Stephen’s oldest child, who helped raise his sisters when their father abandoned them. He became a lawyer as an adult representing many fellow Angelenos as well as Forrester Creations while Nick Marone was in charge. Storm shot Stephanie and framed Stephen for it, but when she found out, Stephanie agreed to ask for leniency in exchange for Storm’s sister Donna Logan leaving Eric. Though Storm was a free man, he remained troubled and accidentally shot his sister Katie in the heart. Racked with guilt, he shot himself in the head so he could donate his heart to her.</p>

<p>The eldest Logan daughter, Brooke Logan, started her tenure on Bold and Beautiful working as a caterer with her mother, which is how she met the Forresters. Brooke rose in the ranks at Forrester Creations, working as a chemist before becoming CEO and President.  Though she’s shared a series-long love with Ridge Forrester, who she has a son with, Brooke also married and had children with Ridge’s father and her mother’s ex Eric Forrester. She crossed other familial lineswhen she had an affair with her daughter Bridget’s husband, Deacon Sharpe (which produced a daughter), her sister Katie Logan’s husband, Bill Spencer, and even Ridge’s brother Thorne Forrester. She also married Nick Marone and is the biological mother to his child, Jack, whose legal mother is her long time rival, Taylor Hamilton.</p>

<p>Like her older sister, Brooke, Donna Logan knows what it’s like to get involved with a family member’s ex. She also had a turn married to Eric Forrester, seduced Brooke’s ex Thorne, and was involved with Brooke’s and her niece, Bridget’s ex-husband Nick Marone. She did have a couple of other dalliances, most notably with Justin Barber, who she married after it was revealed she gave up their child for adoption years previous. It hasn’t all been flings and romances for Donna though, as she has worked as a model, receptionist, and vice president at Forrester Creations.</p>

<p>The baby of the Logan family who received her brother’s heart, Katie Logan, hasn’t had an easy time of it. Whether it was her heart, post-partum depression, or her sister’s affair with her husband Bill Spencer, Katie has had to rebound more than once. She’s not totally innocent, though, as she was engaged to Brooke’s exes Nick, Ridge, and Thorne, as well as Bill’s son Wyatt Spencer. Katie has one son with Bill and has been the CEO of Forrester Creations and Spencer Publications, as well as the head of PR at Forrester.</p>

<p>Flo was first introduced as the woman who helped Dr. Buckingham pass off Hope Logan’s stolen baby for Steffy Forrester to adopt. It turned out, she was also Hope’s cousin, by way of an affair between Flo’s mother, Shauna Fulton, and Storm Logan, who Flo never knew. The former croupier did a brief stint in jail for her crime and then redeemed herself a tiny bit by donating her kidney to her ailing aunt Katie. Flo has been in a love triangle with her high school sweetheart Wyatt Spencer and Sally Spectra since she came on the scene.</p>

<p>Brooke’s firstborn with Eric Forrester was angry and troubled for much of his life. Rick Forrester got into fights, shot Grant Chambers, constantly butted heads with his brother/step-father Ridge Forrester, schemed, seduced women, and had an affair while married to Caroline Spencer. However, that affair led to a deep love with Maya Avant, whom he married and had a child named Lizzy. Unfortunately, he and Maya have since divorced. Always looking for acknowledgment within the family, Rick has been a designer, the vice president, and CEO of Forrester Creations.</p>

<p>Breaking from the family business of fashion, Bridget Forrester became a doctor. Though, she did enjoy a stint as a designer and model. Both her marriages were to men who were involved with her mother – Deacon Sharpe and Nick Marone – but her son Logan is with Owen Knight, who was married to Jackie Marone at the time. And she can never be discussed without mentioning her unfortunate kiss with her step-father Ridge, who she grew up thinking was her brother. Bridget has been shot, suffered a concussion, nearly froze to death, and miscarried two babies. Hopefully, her current life in New York is less dramatic.</p>

<p>Brooke’s youngest daughter has spent most of her adult life in love triangles. When Hope Logan wasn’t bouncing between brothers Liam and Wyatt Spencer, she was fighting with Steffy Forrester over Liam, who she has married twice. Hope has a daughter, Beth, with Liam, who they thought was dead for a time, but it was just a classic soap opera switched-at-birth scenario. Hope also married Wyatt as well as Thomas Forrester. The latter marriage only occurred so she could care for Thomas’ son Douglas who she adopted. Hope also had a relationship with Oliver Jones, who accidentally slept with her mother, Brooke. It’s a family tradition, after all. Professionally, Hope created a couple of fashion lines for Forrester and worked in the company’s office in Milan.</p>

<p>Though once thought to be Nick Marone’s child, Ridge Forrester, a.k.a. RJ is the sole biological child of supercouple Brooke and Ridge. RJ spent much of his youth in boarding schools and did his best to make sure his parents stayed together when he was home. He worked at Forrester Creations and crushed on Coco Spectra before heading back to school.</p>

<p>Marcus Walton came to Los Angeles looking for his biological mother, Donna Logan, who was married to Eric Forrester at the time. Marcus formed a relationship with Donna, was adopted by Eric, and worked for Forrester. He also met his biological father, Justin Barber. Marcus had relationships with Steffy Forrester and Amber Moore, who is his daughter Rosie’s mother. Marcus married Dayzee Leigh and moved to Johannesburg, South Africa.</p>

<p>Will is Katie Spencer’s only child with Bill Spencer. Katie nearly died while giving birth and then fell into post-partum depression. Will has spent much of his life at the center of a custody battle between his parents, but after Katie divorced Thorne Forrester, Will took a page from his father’s book and schemed until he brought his parents back together.</p>

The Can't-Miss Plan to Introduce...