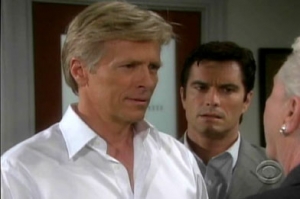 Hold off on the kids! (Soaps.com)

B&B Breakdown for the week of October 12!

In last week’s blog, I questioned Steffy taking out the Shady Marlin because she and Nick barely know each other. I mentioned they were related through Bridget, since Bridget is Steffy’s aunt and stepsister. However, I had to be reminded that Nick is also her uncle because he is Ridge’s biological brother, and was also at one time her stepfather, although I don’t think Steffy was on when he and Taylor were married.

Even though I know that Nick is biologically her uncle, I forgot about their blood relation because A) Steffy and Nick rarely if ever cross paths and B) they haven’t referred to Nick and Ridge being brothers in quite some time. A new viewer would never know Nick and Ridge knew each other, let alone were brothers since it’s never referred to. Stephanie, Ridge’s mother, is now working with Nick at Jackie M, so you would think that would at least garner a comment from one of them. It’s a half hour show, so it’s hard to get a lot in sometimes, but keeping a family tree in tact and fresh in viewer’s minds should be at the forefront of their storytelling. When Jackie told Nick Steffy was interfering in her marriage, he responded, “Little Steffy Forrester?” It would have been a perfect time for him to quip: “You mean my niece?” Or, “My former stepdaughter?” Basically I guess what I’m saying is, it would be nice if they could revisit Ridge and Nick’s tumultuous relationship every once in awhile.

Speaking of Nick, I have really been enjoying him lately, especially his deep concern for Stephanie. But while I’m glad everyone at Jackie M rallied around Stephanie, I thought their cheer was ridiculous and not in a good way. They really could have just all come over and told her how much she meant to them and garnered the same result.

I’m disappointed Owen is so bent on having a baby. Does he really think Jackie wants to change diapers at this stage in her life? Besides, they are a fun, sexy couple. Why do they have to bring a baby into it? Can’t one couple on Daytime be content without procreating?

Bill and Katie continue to heat up the screen. At this point I am believing that Bill really does care for Katie, but the jury is still out for me regarding his motives for taking over Forrester Creations. Since he wasn’t close with, or particularly liked his father, it’s hard to believe he would be doing any of this for him, but who knows?

I understand and can appreciate Brooke and Donna’s concern for Katie. They don’t want to see her get hurt or used by Bill, but they really are treating her like a child. I couldn’t believe Brooke demanded that Katie tell Bill she was through with him and going home with her sisters. It sounded like she was talking to her teenage daughter who was falling in with the wrong crowd.

The only other thing that stood out for me this week was that I’d like to see more of Whip, and I can’t believe we haven’t seen more Justin. Based on the spoilers that should change soon, but who knows how long their screen time will last.

So that’s it for me. What did you think about the week’s events? Feel free to share your thoughts below.

The Bold and the Beautiful Poll:...

The Bold and the Beautiful's Kyle...