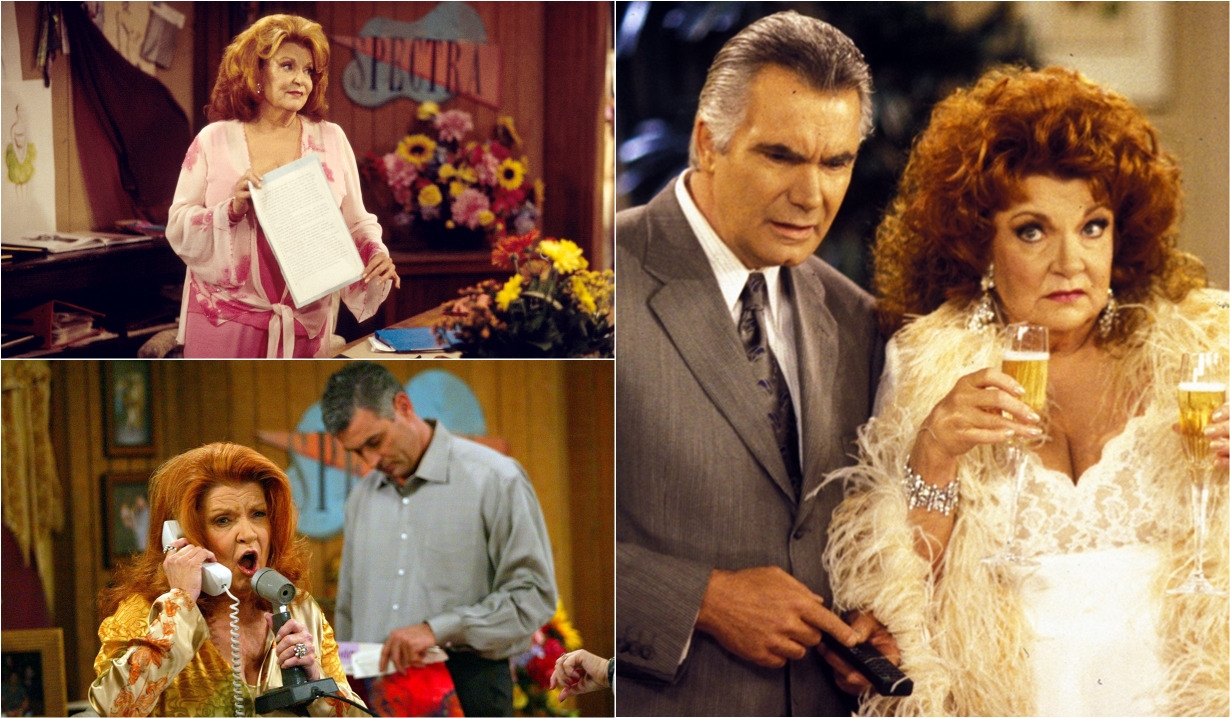 Bold and Beautiful character was a gutsy force to be reckoned with.

As CBS airs a Bold and Beautiful classic episode that features Sally Spectra causing a scene at a fashion show, Soaps.com was eager to remember the favorite and very-much missed character with the larger-than-life personality.

Sally Spectra was the gutsy and dynamic proprietor of Spectra Fashions, a fashion house that often pilfered designs from Forrester Creations and sold them for less. Darlene Conley played Spectra, and though the actress passed away, the character is still alive on the show, retired, and living on a tropical island surrounded by cabana boys.

Sally first connected with Clarke Garrison (Daniel McVicar) when he came to her seeking a loan. She had him steal Forrester designs, then hired him to create fashion for Spectra under the name ‘Beau Rivage’. Sally married Clarke after making him an offer – he’d get half of Spectra Fashions as well as his own label on their second anniversary. When she conceived a child, Clarke wanted her to end the pregnancy and she discovered he was cheating on her. Sally sought a divorce, but they reconciled and their son, Clarke Garrison Jr., was born. Their marriage finally ended after she saw a video of Clarke having sex with his ex, Kristen Forrester (then Teri Ann Linn) just as he would have received his half-stake in the company.

When Sally’s daughter, Macy Alexander (Bobbie Eakes), came to town, Sally was bent on making a match between her and Ridge Forrester (then Ronn Moss), but Sally’s scheming inadvertently led to Macy connecting with Thorne Forrester (then Jeff Trachta), who she later wed after overcoming the Forresters’ objections. Sally, who didn’t receive an invitation to the ceremony, snuck into Forrester Creations dressed as a man to get info on the nuptials and was caught and accused of stealing designs.

Sally had a hugely contentious relationship with Stephanie Forrester (Susan Flannery), but it was Sally who helped Stephanie’s family locate her when she was wandering the streets, homeless, and suffering from amnesia, after having a stroke. In one clash with Stephanie, Sally ended up in the swimming pool as they argued over the Forrester family accusing Macy of stealing their exclusive wrinkle-free BeLieF formula.

Sally and Stephanie competed for the attentions of Jack Hamilton (Chris Robinson), who was comforted by Sally after Stephanie dumped him due to his crooked dealings putting her daughter Felicia in jeopardy. Sally lied about being pregnant to get Jack to marry her, and enjoyed a bachelorette party complete with romance novel hunk Fabio, but Stephanie exposed her before the wedding could take place.

Tension escalated between Sally and Macy when they both ended up dating Anthony Armando (Michael Sabatino). It turned out Macy was cozying up to him to prove he’d killed a model. Sally took a bullet intended for Macy during a stand-off.

Having sung with Eric Forrester (John McCook) at events, Sally was thrilled when he began romancing her and proposed, but when it was revealed that it was payback for her latest attempt to steal designs and the engagement ring was phony, Sally admitted she had it coming.

Sally accepted Clarke back into the fold after he got shot saving their teenage son, CJ (Mick Cain), who had been kidnapped by men who had hired Clarke to tank her fashion house. CJ became interested in Kimberly Fairchild (Ashley Tesoro), Macy’s estranged father, Adam Alexander’s (Michael Swan) second daughter, but wanted to marry Becky Moore (Marissa Tait). Sally made sure CJ and Becky had a special ceremony before Becky died of cancer.

Sally interfered with Stephanie’s wedding to Eric Forrester by planting an X-rated photo of Eric and Genoa City’s Lauren Fenmore (Tracey Bregman) in the minister’s bible. Sally also tried to halt their next ceremony in Italy, and ended up doused in an Italian lake for her efforts.

Sally and Stephanie set aside their animosity to mourn Macy together after she was killed in a car explosion. Later, after Sally learned the secret that Massimo Marone (Joseph Mascolo, Stefano DiMera, Days of our Lives) was Ridge’s biological father, she brought Spectra under the Marone umbrella and enjoyed a brief period with Stephanie acting as her housekeeper. They flew to Italy for the Portofino Challenge, where Macy was revealed to be alive. Sally suffered a heart attack, and Macy returned to Los Angeles with her and reunited with Thorne (Winsor Harmon).

After firing her faithful employee, Darla Einstein (Schae Harrison) for getting pregnant by Thorne, Sally feigned another heart attack to garner sympathy as Ridge handed Spectra over to Brooke Logan (Katherine Kelly Lang), got drunk with Stephanie and cut off her hair. Sally lost Macy again when she was forced to pull the plug on her life support after she fell into a coma when a chandelier dropped on her. Sally was touched when Darla and Thorne named their new daughter Alexandria after Macy and agreed to be Matron of Honor at their wedding.

Sally took revenge on Brooke by doctoring her paternity results in Nick Marone’s (Jack Wagner) favor and got her company back. This time she brought Thorne on to helm the company, and later gave Thomas Forrester (then Drew Tyler Bell) a shot, as he also felt unappreciated at Forrester Creations. Sally loved to stick it to the Forresters by hiring their own – she also employed Felicia Forrester (Lesli Kay) at one point, as well as Kristen’s husband, Tony Dominguez (Paulo Benedeti).

Sally shuttered Spectra Fashions when Thomas lost a fashion competition, moved in with Thorne and Darla, and accepted a job as a receptionist at Forrester Creations when Thorne offered it.

Sally was crushed by the loss of Darla, who died after being hit by a car driven by Taylor Hayes (Hunter Tylo), and moved away to live in the tropics.

<p>Sally connected with Clarke Garrison when he was designing for Forrester Creations. She recruited him to steal designs for Spectra Fashions.</p>

<p>Sally married Clarke after offering him half of Spectra Fashions and his own label. He would collect on their second wedding anniversary. Sally had a penchant for hiring people away from Forrester, including several of their own family members.</p>

<p>Though Macy resented her mother for prioritizing work over being a parent, and they had their ups and downs, Sally adored her only daughter. Sally went through losing Macy twice, once when she was presumed dead only to be discovered alive, then when Sally was forced to disconnect Macy’s life support when she wound up in a coma.</p>

<p>Sally Spectra and Stephanie Forrester had a huge amount of animosity between them and were usually rivals, whether it be over fashion business or men. Occasionally, they set aside their differences to be there for one another, however, such as when Sally helped Stephanie when she had amnesia, and Stephanie and Sally mourned Macy together.</p>

<p>Sally loved a good time and her bachelorette party was no exception. She entertained romance novel cover hunk Fabio, who recurred in her fantasies. Sally interacted with other guest celebrities on the show as well, including Phyllis Diller, Eric Estrada, and more.</p>

<p>Sally loved the chance to sing with Eric Forrester and was tickled when he began romancing her and proposed. However, it turned out it was a phony diamond ring and a sham to get back at her for pilfering designs. Nonetheless, the two always had a soft spot for one another. To this day, Eric speaks fondly of Sally.</p>

<p>Sally ended up doused on more than one occasion when she tangled with Stephanie Forrester. The first time was in a swimming pool, and the second time, pictured here, Sally wound up in a lake in Italy during a fashion competition in Portofino.</p>

<p>Macy’s father, Adam Alexander, showed up in Los Angeles with another daughter, Kimberly, who Sally took under her wing. After Macy was presumed dead, Sally was thrilled to discover her alive with Adam in Portofino.</p>

<p>Sally’s son, Clark Garrison Jr., joined the family business and tried to look out for his mother’s interests after her departure for the tropics. Sally was there for her son when he married Becky before she died of cancer.</p>

<p>Sally was most at home bellowing into the P.A. system at Spectra Fashions and on the runways competing against the Forresters. Sally was a dynamo and a huge presence among her staff and her family.</p>

<p>Sally was known for her dramatics. After Ridge took control of her company, she feigned a heart attack, then got drunk with Stephanie and cut off her hair.</p>

<p>There was no love lost between Sally and Brooke. Sally’s company was handed over to the blonde at one point by Ridge, and Brooke also interfered in Thorne’s relationship with Macy in Sally’s view.</p>

<p>Sally’s trusty assistant, Darla, found herself fired after getting pregnant with Thorne’s baby. However, after Macy died, they mended fences as Darla gave birth to a baby girl and named her Alexandria in memory of Sally’s late daughter.</p>

How Sally and Thomas Could Team Up...