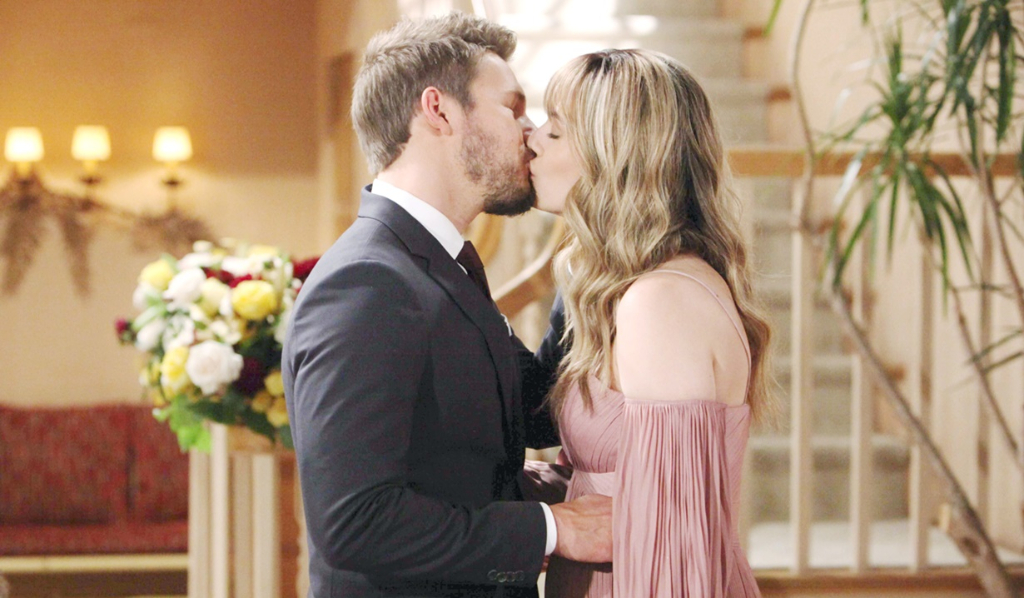 As CBS airs a Bold and Beautiful classic episode featuring Hope and Liam’s wedding in Italy, Soaps.com looks back on their love story and the various challenges they’ve overcome to be together.

Hope Logan (then Kim Matula) befriended Liam Cooper (Scott Clifton) and helped him connect with his biological father, Bill Spencer II (Don Diamont), when he first arrived in Los Angeles and they soon fell for one another. When Amber Moore (Adrienne Frantz) insisted she was pregnant with Liam’s baby, his romance with Hope faltered repeatedly as they tried to figure out whether or not to be together under the circumstances. They reconciled when it was revealed Liam did not father Amber’s child.

Hope and Liam became engaged, but Hope broke it off and left her ring on the mantle at the cliff house after catching him kissing Steffy Forrester (Jacqueline MacInnes Wood). She followed the pair to Aspen, and found herself trapped in a gondola watching Liam get married to Steffy.

Hope and Liam’s paths crossed during a trip to Cabo San Lucas, where he was vacationing with Steffy, and she was with Steffy’s brother, Thomas Forrester (then Adam Gregory), and they wound up sharing a kiss. They wanted to reunite but Liam stayed with Steffy after Bill faked her MRI results following an ATV accident. Once the manipulation was revealed, Liam decided to annul his marriage to Steffy and marry Hope.

Hope and Liam’s wedding was stopped by Steffy, who wanted to go the divorce route, and though Hope moved in with Liam, she developed anxiety from living with a married man and sought therapy. Hope became hooked on anti-anxiety pills, but once that was in the rear-view mirror, she and Liam planned to finally tie the knot in Italy.

Hope and Liam were manipulated again before their wedding in Puglia, but the nuptials went ahead. Afterward, Hope saw a video of Liam kissing Steffy prior to the ceremony and asked for a do-over wedding in Los Angeles, but sent Liam away when he showed up to the event with his hair dyed and sporting a tattoo – he had partied with Steffy the night before.

Hope still wanted Liam, despite the fact he’d moved on with Steffy, and suggested her rival move out of the cliff house so he could make a decision. Hope and Brooke then surprised him with a wedding on the property, but Steffy showed up and announced she was pregnant. Hope urged Liam to be with the mother of his child.

After Steffy miscarried and moved overseas, Hope and Liam became engaged again, but his newfound half-brother Wyatt Fuller (Darin Brooks) was also competing to win her love at that point. Hope and Liam were set to be married when she spotted Liam talking to Steffy and elected to take off to Hawaii with Wyatt.

Hope dated both brothers, but eventually was set to marry Liam once again, this time at the Eiffel Tower in Paris. When Liam was deliberately waylaid, Hope married Wyatt instead. When Hope miscarried their baby, she decided to say farewell to her marriage and to Los Angeles and told Liam she would always love him before leaving.

Hope (Annika Noelle) returned from Milan to Liam living in a hotel room devastated that Steffy, who was pregnant, had a one-night stand with his father. Hope was prepared for Liam to remarry Steffy, but he proposed to her instead. Hope and Liam made it to the altar, only for Wyatt to reveal that Bill had faked an ongoing affair with Steffy, so Hope urged Liam to be with her and his daughter, Kelly. Soon, Hope found out she was pregnant with Liam’s child and he kissed her.

Steffy stepped aside and urged Liam and Hope together. They married, but when Hope traveled ahead of Liam to Catalina Island for a ‘babymoon’ in bad weather, she went into labor, and Liam arrived to hear their baby had died. Hope became depressed and pushed Liam to reunite with Steffy, who had unknowingly adopted Hope and Liam’s very-much-alive baby girl, and Liam reluctantly signed-off on an annulment.

Hope was pursued by Thomas, who hid the truth about her daughter, Beth, being alive when he found out. Hope married Thomas, but another annulment wasn’t far down the line once the baby secret came out. Thomas continued to obsess over Hope, who was back with Liam and finally had her little family. Despite another manipulation, which caused Hope to see Liam and Steffy share a kiss, Hope and Liam were ‘married’ in their cabin by Thomas’ young son, Douglas Forrester (Henry Joseph Samiri) after Thomas’ scheming was exposed.

<p>Hope was rushed to her wedding ceremony in the back of a truck. The 2012 nuptials almost didn’t happen as Liam and Hope were manipulated behind-the-scenes.</p>

<p>Puglia, Italy provided a gorgeous backdrop for an al fresco wedding. Hope and Liam pose in front of colorful streamers on their big day.</p>

<p>Hope and Liam exchanged their vows overlooking the sea in Puglia, Italy. Earlier, the pair had indulged in romance while touring around the town.</p>

<p>At the officiant’s signal, Liam plants a kiss on his new bride. Hope and Liam were pronounced husband and wife in Italy after many trials and tribulations.</p> <p> </p>

<p>Hope and the wedding officiant look on as Bill hugs Liam. Bill manipulated to keep the marriage from happening by springing Hope’s father, Deacon Sharpe, from jail and bringing him to Italy.</p>

<p>Hope poses for a wedding photo with her stepfather, Ridge, and her mother Brooke. The clifftop overlooking the sea where the ceremony took place was breathtakingly beautiful.</p>

<p>Hope looks in the mirror and reflects on her wedding day. She is glowing and beautiful in the ivory strapless gown, simple jewelry, and elegant half up-do hairstyle.</p>

<p>Liam looks debonair in his silver-grey tux and black silk bowtie prior to the wedding. He strikes a pose for the camera ahead of the ceremony.</p>

<p>Hope poses on the staircase in Brooke’s living room. She smiles at the camera in her elegant gown, holding her bouquet.</p>

<p>Hope and Liam wear matching smiles as they pose in their wedding gown and tux. The happy couple can’t wait to be wed.</p>

<p>Brooke, Carter and Wyatt pose with the happy couple on their wedding day. Brooke and Wyatt stood up for the couple while Carter performed the ceremony.</p> <p> </p>

<p>Hope touches Liam’s lapel as they smile together. The happy couple pose for the camera in their gown and tux on their wedding day.</p>

<p>Brooke makes a happy mother-of-the-bride on this special day. Here she poses in her baby blue strapless gown.</p>

<p>It’s a big smile for this Logan girl on Hope’s big day. Bridget poses in a light orange chiffon gown complemented by ruffles that warms her complexion.</p>

<p>Father and daughter share a sweet embrace. Bridget was happy to make an appearance at home with the family for Hope’s wedding to Liam.</p>

<p>Eric and Quinn look amazing together in this shot. Quinn is wearing a peacock blue gown with jewelry she designed herself and which complements Eric’s silverish-grey pinstripe suit with champagne silk tie.</p>

<p>Hope poses with her aunts, Katie and Donna, and her half-sister Bridget. The Logan girls were all in attendance on Hope’s big day.</p>

<p>Taylor attended Hope and Liam’s wedding with Steffy. She wasn’t happy about it as she felt Liam should be with her daughter.</p>

<p>Ridge clasps his brother Thorne’s shoulder as the duo poses at Hope and Liam’s wedding. It’s not often they get along so well! They both look amazing in formal wear in different shades of blue. </p>

<p>Katie in an exquisite off-white gown, poses with her date for Hope’s wedding. Thorne is wearing a baby blue suit complemented by a midnight blue silk tie that sets off his eyes.</p>

<p>Bridget stands for a photo with Ridge and Thorne. The Forresters have reunited to help celebrate Liam and Hope’s special day.</p>

<p>Wyatt, who was Liam’s best man at the wedding, poses with Sally. The redhead wore a slinky silver cocktail gown that was just her style, while Wyatt rocked a tux with bowtie.</p>

<p>Emma and Xander came to the wedding together. The Forrester interns were happy to help support Hope and Liam on their special day, especially since Emma was such a big fan of Hope. Emma wore an adorable silk cocktail dress in pastel colors, while Xander looked dashing in his hip formal wear.</p> 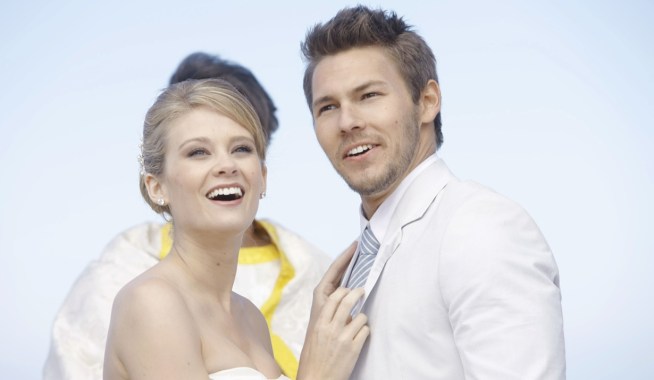 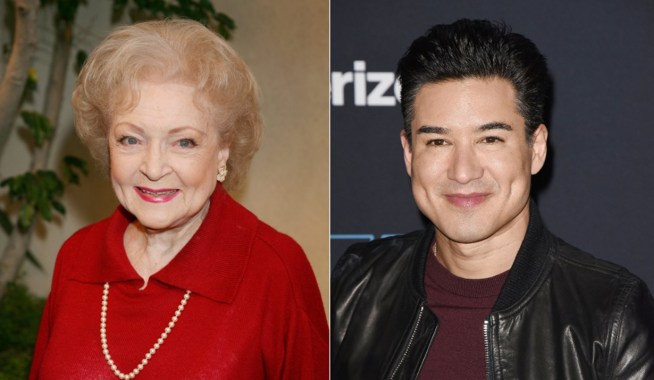