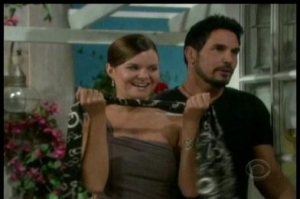 Wanting what she can't have. (Soaps.com)

B&B Breakdown for the week of October 5!

Bill’s takeover has added a new twist this week with the addition of Bill Sr.’s instructions on the DVD to his son. His request that Bill Jr. carry on his hatred of Eric and the Forresters gives us viewers a little better understanding of why Bill might be going after FC with such gusto. Also, his cold, stoic looks behind Katie’s back makes me wonder if Bill is in fact just using Katie, although I’m still not entirely sure how she’s so important to his plan.

I have to say while I would be disappointed if Bill was in fact just using Katie, it would be a great twist because he’s done such a good job of snowing her and the audience. Case in point: Friday’s steamy kiss and declaration of his feelings. (God, I love a man who takes charge!) If he is using her, it would completely devastate her and then hopefully lead to even more compelling drama.

As much as I am liking this storyline, I have a couple of questions. If Bill has taken over Forrester’s loans from the bank, why does Eric need to raise money to pay them back? And if he does pay them back, will he get to keep his company? If that’s the case, why would Bill help Eric out by buying his beach house, if he wants FC for himself? I’m so confused! Please feel free to clear it up for me below if you understand this better than I do.

Here’s my other question: Why was Jarrett helping Bill move his boxes into the beach house and running his errands? First of all, I would think Bill would hire a moving company or go to the jeweler himself, and secondly, Jarrett is a journalist! Why has he turned into Bill’s lapdog?

As for Katie being CEO, I have to side with Forrester on this one. She doesn’t seem to exactly be qualified for the position. Not that I don’t think she is smart or capable, but CEO? Maybe in a few years. Besides, how effective can she be when as it is, she spends her whole workday in Bill’s arms?

While the takeover has been fun to watch unravel, I’m disappointed Justin’s presence in town hasn’t been more of a factor. I feel more should be made of his being Marcus’ father and Eric adopting him at the same time. And since he is on the opposite side of the takeover from Donna and Marcus, why aren't we seeing them butt heads more? There may be more to come, but if not I’ll be really disappointed.

More Stephanie drama unfolded as well and I am happy that Taylor now knows about her stroke, but my favorite scene of this storyline for the week was Pam and Whip’s interaction. Since he hasn’t been used much lately, it was just plain great to see Whip, but there was also just something about their scene that stuck with me. Whip’s concern for Stephanie was evident, as was Pam’s, who is deeply worried for her sister. Even though Whip accepted Pam’s fake insistence that Stephanie would be fine, you could tell he saw right through her. It was a well-acted scene on both accounts, filled with subtly, a little humor and compassion. It’s the kind of scene I relish on soaps, because genuine interaction between characters is rare, but so rewarding.

I did not like Steffy’s sense of entitlement with the Shady Marlin. Why would she feel like she could take Nick’s boat without his permission? Even though they are sort of related through Bridget, unless I missed something, they barely know each other. Not to mention, her butting into Owen’s relationship is really getting on my nerves. Owen keeps telling her he is lucky and happy to be with Jackie, but Steffy won’t stop suggesting they are not right together. Let it go already!

That's it for me this week. What did you think? Agree, disagree or touch on something I left out below!

The Bold and the Beautiful Poll:...

The Bold and the Beautiful's Daniel...