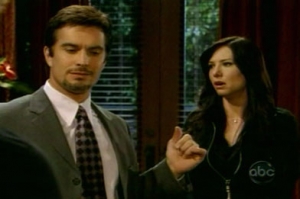 Discovery and acceptance in one day! (Soaps.com)

B&B Breakdown for the week of September 28!

The biggest news to hit B&B this week is that Sarah Brown (Claudia, General Hospital) is joining the cast as Sandy Sommers. She won’t debut until November, but she will be interacting with the characters of Whip, Nick and Bridget, as according to the spoilers, she will be Nick and Bridget’s surrogate. I will be happy to see Nick and Bridget in a real storyline again, but I hope their lighthearted tone of late doesn’t get too serious. I’m also glad that Rick Hearst (Whip) will be part of this storyline because Sarah had great chemistry with him on General Hospital and I’ve gotten worried about him not being used too much lately.

B&B seems to have realized what the fans have been saying for so many years that there aren’t enough characters outside the Logan and Forrester families. They have rectified that by adding four new unrelated people this year: Bill, Whip, Justin and now Sandy. But is this really a good thing? I love the new faces and new dynamics, but is there enough time to devote to all these people, plus the already established characters? Again, I love that we are getting new blood on the show, but if they don’t have time to showcase stories with Felicia, Thorne, Rick or Taylor, how will all the newbies fair?

The show tells their stories so fast these days that even if a new character is strongly involved, they might be seriously backburnered after the two weeks it takes to wrap up their arc. Bill has rebounded nicely after his downtime following his strong debut and is smack in the middle of a romance and corporate intrigue, but Whip came on strong and is now just background fodder at Jackie M business meetings. As suggested, with Sarah Brown coming on, that will change, but that’s not for another month. We also have Justin who was featured for a week and a half, the time it took for both him and Marcus to learn they were father and son. He’s still involved in Bill’s business dealings, but will we actually get to see him and Marcus form a relationship or more of him and Donna? I certainly hope so.

All these new actors to B&B are on contract, which presumably means the show has long term plans for them. I just would like to see them all used evenly along with the core cast the show already has.

What do you think about Sarah joining the CBS soap? Express your opinion in our poll on our sister site Soap Opera Fan Blog.

So moving on, this week gave us Justin and Marcus learning about each other, Eric adopting Marcus, Bill taking over FC, Stephanie alienating her co-workers in order to keep her stroke a secret and Jackie telling Steffy to back off Owen. I have to be honest; I don’t have a lot to say about any of that. It’s not that it was a bad week, it just seemed like a week setting up what’s to come. I am looking forward to Bill shaking things up at FC by being in control, however I’m not sure Katie is the best choice as CEO, since she doesn’t have any experience, and I’m not sure why he needed her on his side before he went through with the takeover. I do feel bad that Eric finally gave Ridge control of the company, just as Bill took it over. Next time buddy. Steffy is making her move on Owen, which I’m not thrilled about and the Justin/Marcus/Eric story was wrapped up way too quickly and without enough conflict in my opinion. As for Stephanie, I did like her scenes with Pam and can only assume we will get more of her physical issues in the weeks to come. Or should I say week, because in B&B time she should be on the mend by the time I write my next blog.

That’s it for me this week. What did you think? Feel free to agree or disagree with me or discuss something I didn’t touch on below.

Sarah Brown Joining The Bold and the...