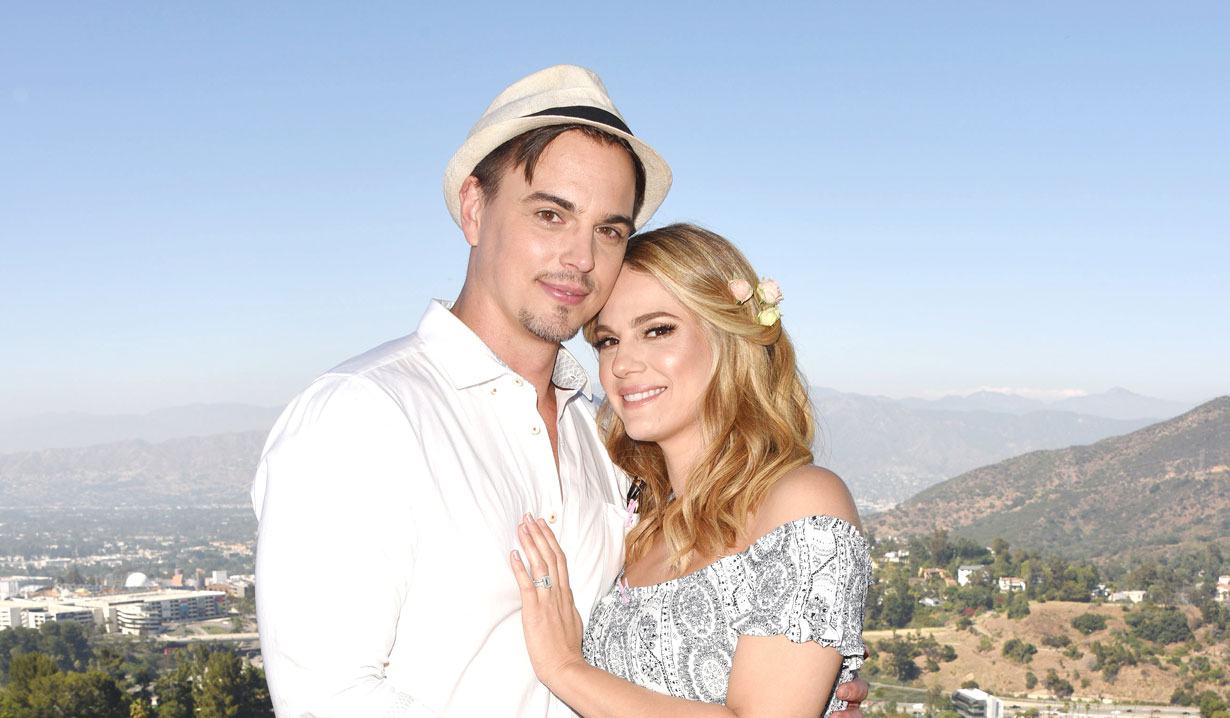 The Bold and the Beautiful’s Darin Brooks (Wyatt Spencer), who formerly played Max Brady on Days of our Lives, along with wife Kelly Kruger Brooks, who is Mackenzie Browning on Young and Restless and has also played Bold and Beautiful’s Eva the publicist, will be bringing their adorable infant daughter along for a television spot on Entertainment Tonight. Soaps.com readers can see the segment tonight, Friday December 6 on CBS at 7:30 PM EST. Check your local listings so as not to miss. Brooks & Kruger Brooks welcomed their first child, Everleigh Jolie Brooks, back in September. Recently, both proud parents shared photos surrounding the baby’s first Thanksgiving, with Kruger Brooks laughingly pumping breast milk during preparation for the holiday dinner, and in another post, gushing it was the best Thanksgiving yet. With Brooks’ storyline as Wyatt heating up on Bold and Beautiful, as his fiancée, Sally Spectra (Courtney Hope) recently called him by his brother’s name during an intimate moment, and his brother Liam (Scott Clifton) has returned to work at their father’s company, there should be no shortage of things to discuss during their TV interview.

In addition to doting on their newborn, the Kruger Brooks family also loves their pets, including their 15-year-old boxer, Charlie, and the newest canine member of the family, Chancey Pants. On Giving Tuesday, Kelly Kruger Brooks took to her Instagram account to share a photo of her holding the pup and explaining how he brought life back into their home after losing their pug, Maddy, had left them all feeling sad. The actress stressed the importance of saving animals in the holiday season and gave a shout out to Best Friends Animal Society and the Labelle Society, where they adopted Chancey Pants.

Thanksgiving prep looks a lot different this year. Super pumped about it🥛 Happy Thanksgiving everyone! What are you grateful for? #happythanksgivng #sograteful #newmom

By far the best thanksgiving yet. Couldn’t be more grateful for my family. Happy Thanksgiving everyone. 🍁🍽 #babysfirstthanksgiving #everleighjolie

It’s #GivingTuesday 🙌🏻 Adopting @chanceypantsbrooks was the best decision we ever made. Honestly, he saved me more than we saved him. After our pug maddy died our house was so sad. Charlie, our 15 year old boxer was so depressed, I couldn’t stop crying and @theedarinbrooks was trying to stay strong for us. Chance didn’t replace Maddy by any means but he brought some life back to our home that was missing with Maddy gone. Plus he was the first pet @theedarinbrooks and I had together from the start so it prepped us for our baby coming a few months later! @bestfriendsanimalsociety is an incredible organization we love to support, they do incredible work saving animals. Join me on this incredible day of giving by donating to @BestFriendsAnimalSociety to help save homeless pets. Every donation will be matched, so your kindness will go twice as far! Visit the link in my bio, and let’s work together to #SaveThemAll this holiday season. If you can save a pet this holiday season, I’m sure you will realize they saved you more than u saved them. It’s the best thing you will do! 💕💕💕💕🐶🐶🐶 ps this is an older picture of Chance. He’s SO big now. Head to his page, I’ll be updating again soon! #adoptdontshop