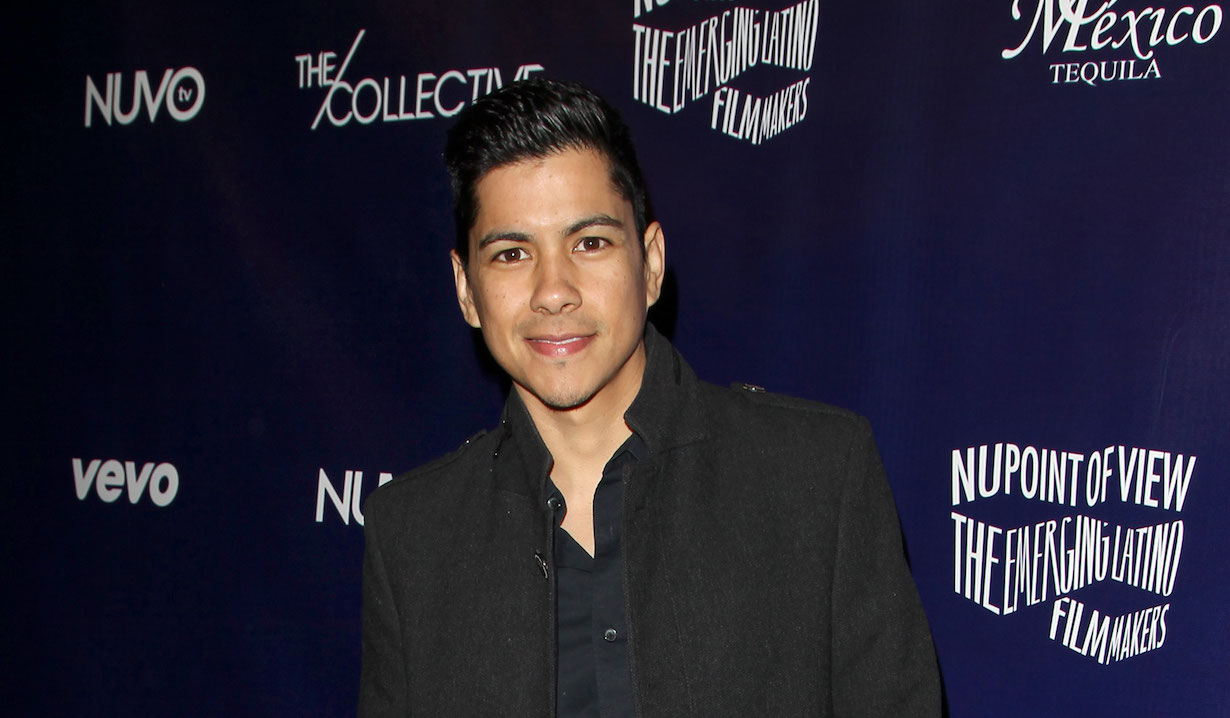 Meet the newest addition to the B&B family.

Jeremy Ray Valdez first appeared on The Bold and the Beautiful as Detective Alex Sanchez on March 8, putting him smack dab in middle of the who-shot-Bill-Spencer front burner storyline. Soaps.com recently talked with the multi-hyphenate actor, who had to push our interview back a bit to tend to his newborn son, who was being “a little fussy.” When he called just a few minutes later, it provided the perfect opening to our conversation.

Soaps.com: So, let’s start with your son. Is this your first child?

Valdez: Yes. My wife and I, [our] first child. This is one and only. We’re one and done. He’s like a month and two weeks. More: Courtney Hope out at B&B

Soaps.com: How is fatherhood treating you so far?

Valdez: Between shooting the show, having the baby, it’s been an unbelievable gift and a struggle at the same time. [laughs]

Valdez: You know, with sleep and then wanting to spend time with him, but wanting to work, you know what I mean? But it’s just like, I could be having the craziest day in the world, get home, see his little face and I’m like, ‘Oh my god! Everything’s okay in the world.’

Soaps.com: That’s amazing. Is there anything about fatherhood that surprised you or that you weren’t quite prepared for?

Valdez: I’m learning a lot more about myself than I anticipated. My ability to be patient, my ability to cope with stress and just learn new things. I’d never burped a baby, you know, it’s been so many years since I’d even changed a baby, but just learning new things about myself. And probably my wife and myself, how we interact with one another and how it’s brought us closer together.

Soaps.com: In regards to The Bold and the Beautiful, I know we can’t talk storyline, but can you tell us what your experience has been like so far?

Valdez: Well, this is my first experience doing daytime. It was actually my first daytime audition ever. I’ve been acting for probably 16 years. I’ve done a lot of feature films and a lot of primetime, but the opportunity to do daytime had never really presented itself and when this came up, I looked at the material and I kind of jumped at the chance. I thought it would be a challenge and I thought it would be a fun project to work on. It’s such a popular show worldwide and I know so many people that watch and I was like, ‘Yeah, let’s do this.’ It’s been an incredible experience in the sense that I’ve learned a lot because the format of shooting a daytime show as opposed to a primetime show is completely different. It’s multi-camera, it moves really fast, there’s a lot of work involved. It’s just been a learning experience in that sense, but I’ve also had a ton of fun. Ed Scott, the supervising producer, when I booked the role he took me in his office and sat me down and he said, ‘Look Jeremy, this is going to be a lot of work, but everybody has fun and everybody brings their best game.’ It’s certainly true. I’ve had a lot of fun so far and I’ve really enjoyed working with the cast, with the crew. It’s like stepping into a huge family because they’ve been together for so long and they’ve really welcomed me with open arms and I’ve been really grateful for that.

Soaps.com: That’s great to hear. With so many characters with motive to shoot Bill I imagine you’ve worked with a lot of the cast so far.

Valdez: I feel like I’ve worked with probably almost 95% of the cast if not more.

Soaps.com: Is there anyone in particular who has made an impression on you or is there anyone you haven’t worked with yet that you’d like to?

Valdez: Like I said, I worked I think with almost everybody … an impression, you know, I think Thorsten [Kaye, Ridge Forrester] and I really hit it off. I really enjoy working with him. He’s a professional and he’s really dedicated to the work. Not only that, he kinda gave me a lot of hints and advice about how the process works in daytime as opposed to primetime and things to help me be successful. He’s also kind of given me a lot of encouragement and support, so I’ve really appreciated that.

You know, Scott Clifton [Liam Spencer], I’ve done quite a few scenes with him, of course, and he’s also a father, a young father, so he had some fathering advice. Like the day after my son was born, I was on set working and I hadn’t slept and everybody kind of rallied together and were like, ‘Jeremy we’re going to get you through this day.’ We had a ton of scenes to do and Scott was one of the guys that really stepped up and was like, ‘Jeremy let’s run lines. Let’s prepare you for this and we’re going to get you through each and every scene.’ And that’s kind of how the whole cast was. It’s been really cool.

Funny enough. Rena Sofer [Quinn Fuller Forrester] and myself, we had worked together previously on NCIS. We were in the makeup room and we looked at each other. I was like, ‘Rena.’ She was like ‘Jeremy. We worked together.’ [laughs] I was like, ‘I know. We were on NCIS together, weren’t we?’ She played my lawyer on NCIS. That was really fun and I’ve really enjoyed getting to work with her again.

Soaps.com: I laughed during the scene of Justin filling in Detective Sanchez on Bill’s backstory with his sons and with Sally. How did you react reading some of these storylines? Were you surprised by how outlandish they can get? Valdez: Yes. The producers and the other actors have kind of filled me in piece by piece. Like some of the crazy things that have happened, with like Scott Clifton’s character’s kidnapping, Liam’s kidnapping, and just all kinds of things. I’m like, ‘Wow!’ Because I had never really watched the show before, but, you know, it’s a soap opera. Great things happen. Big things happen. Outlandish things happen. I’ve been really surprised to learn about all that.

More: Rome Flynn to How to Get Away With Murder

Soaps.com: Can we expect Detective Sanchez to be on the canvas for a while?

Valdez: Oh, yeah. I think so. I think I’m the lead detective in town and I expect to be hopefully doing this show for quite a while. I really enjoy doing it.

One of the things I really, really liked is the fan base. My social media, my Twitter, my Instagram, my Facebook, they’ve all … as soon as my character started airing, my social media sites have really started blowing up. The fans are passionate. [laughs] Around the world. I’ve heard from people all around the world. These episodes haven’t even aired overseas yet I don’t think and people are beginning to hit me up and I’m like, ‘Wow. These people are on top of The Bold and the Beautiful game. That’s for sure.

Soaps.com: Yes. Definitely a passionate fan base. You’re also a producer, a photographer, and a musician. Do any of your artistic passions outweigh the others?

Valdez: I consider myself an actor first and foremost. That’s my true life’s work. My true passion. Probably a photographer second. Right now, I have a photo exhibit going on in Los Angles at the Leica Boutique, here on Fairfax. I’ve been really blessed to travel around the world quite a bit and do a lot of street photography. And because I also am friends with a lot of well-known actors and musicians I get to [shoot] them as well and photograph for some different magazines and had quite a bit of my work published. And then I’ve been a musician since I was a little boy. I started playing music when I was eight years old. I’ve gotten to do some really cool things with music and tour and play some huge shows around the country, but it all kind of always takes the backburner to acting because I feel like that’s really what my purpose is.

Soaps.com: Do you find they all kind of complement each other? Valdez: Oh, yeah. They’re all creative mediums. I feel when I’m not acting, at least I get to be creative as a photographer or as a musician. And producing, that of course ties into acting and film and the television world as well. As long as I’m being creative, I’m a happy person and I’m very lucky to have a wife that knows she married a creative person and knows all the ups and downs that go along with that. So, I’m very blessed in that sense as well.

Soaps.com: Any artistic pursuits that you haven’t tried yet but would like to?

Valdez: Directing. I’d like to try my hand at directing. I’ve also written some projects, a feature film, actually I just finished writing, my writing partner and myself, called Spinners. I’m not sure if I’m going to direct that but definitely producing that. But yes, I would like to direct. I’d like to maybe start off with a couple of short films and hopefully segue into feature film or television. I don’t know. I feel like directing has to do so much with working with actors and acting myself and having spent so much time working with other actors, I feel like that’s something I could really sink my teeth into.

Soaps.com: You’re obviously a very busy person especially with the new baby, but what do you enjoy doing during your downtime, if you have any?

Valdez: Right now, free time is scarce, but my wife and I travel a lot. That’s kind of our big thing that we do. Last year, we went to Ireland and London in October and last June we went Prague, Budapest, Vienna. Before that, we were all over Italy, in Rome and Florence and the Amalfi Coast. Paris. We travel a lot. That’s kind of our thing. When we have free time and we can get away, she’s a career woman so when we do get away that’s what we do. We love to travel. Travel and eat.

Soaps.com: Anything you’d like to say to the fans of B&B?

Valdez: Just thank you so much for the support and the feedback.

You can check out his photography at Cypher Photo Studios and don’t forget to follow him on Instagram and Twitter. What do you think of Detective Sanchez on B&B so far? Share your thoughts on the character and the addition of Valdez to the cast with us below.