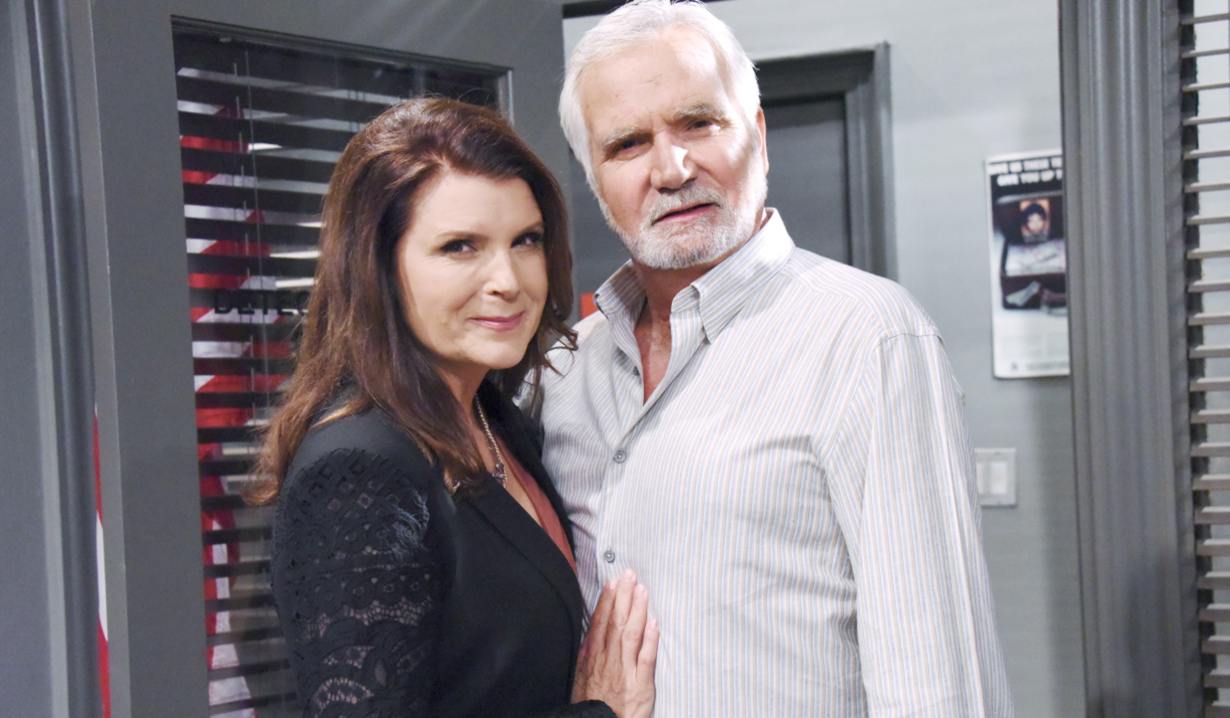 She keeps coming back.

Soaps.com was thrilled at Kimberlin Brown’s unexpected return to B&B, as the evil Sheila Carter, who much like the proverbial cat, seems to have nine lives and keeps coming back. If you are unfamiliar with the trail of destruction Sheila has left in her wake on “The Bold and the Beautiful” and “The Young and the Restless,” or want a refresher, here is a look back at her infamous history.

Sheila’s debut and the baby swap.
Sheila debuted in Genoa City as a lab assistant to Lauren Fenmore’s then husband, Dr. Scott Grainger. Sheila fixated on Grainger, drugged him to have sex with her, and when she wound up pregnant, the doctor divorced his wife. Coincidentally, Lauren was also pregnant. Grainger’s women delivered at the same time, but Sheila’s baby died, prompting her to buy a baby and swap it out for Lauren’s infant, Scott Jr, whom she passed off as her own. Sheila’s deception finally came to light during a confrontation with the increasingly suspicious Lauren at the farmhouse where Sheila was holding her mother Molly, who knew the truth. Molly came clean to Lauren, who left Sheila to die when the farmhouse went up in flames.

Sheila crosses over to Bold and the Beautiful.
After surviving the aforementioned fire, and turning up in Los Angeles, Sheila set her sights on the dashing Eric Forrester, who was married to Brooke Logan. Ms. Carter wheedled her way into Forrester’s life by dispatching with his son Rick’s nanny, who ended up paralyzed following an ‘accident’, and replacing her. Eric divorced Brooke and he and Sheila took up together happily until Forrester family friend, Lauren, showed up in Los Angeles. Lauren was only one obstacle Sheila had to overcome in her quest to marry Eric. Brooke was pregnant with Bridget, who could have been Eric’s or Ridge Forrester’s, so Sheila changed the paternity results, a move which saw her become entangled with security guard, Mike Guthrie. After an attempt to blackmail Lauren into staying silent failed, the bitter rivals engaged in a vicious catfight before Sheila ran out of her own wedding as her nemesis was poised to expose her. She still managed to wed Eric later in private.

The new Mrs. Forrester worked happily at Forrester Creations until she learned Dr. Scott Grainger had fallen ill in Genoa City, and realized that since she had survived the fire, she was, in fact, committing bigamy. Eric and Sheila’s marriage began to suffer and they planned a trip to Catalina Island in an attempt to revive it. There they encountered Lauren and the terminally ill Scott, whose dying wish was that his wife should keep mum and let Sheila move on with her life.

Alas, Sheila’s troubles weren’t over, as Eric’s ex-wife Stephanie Forrester knew Lauren had something on her and began causing trouble. While striving to keep her past hidden, Sheila caused the death of her former therapist, Jay Garvin, during a confrontation. Later, she schemed to give Eric a child, and had sex with her lawyer, Connor Davis, to ensure a pregnancy. When she broke the happy news to Eric, he revealed he’d had a vasectomy. Sheila staved off divorce by agreeing to see a psychiatrist, Dr. James Warwick. Warwick managed to uncover Sheila’s connection to Lauren, which led to him being held in a dungeon in Harry Houdini’s former mansion by the evil brunette and her sidekick, Mike. In a twist, Sheila fell for James, but he was playing her, and Stephanie helped him escape the dungeon. Sheila’s next trick was to hold Lauren, James, Ridge, Brooke, Eric, and Stephanie at gunpoint with plans to poison them, but in another unforeseen turn, Sheila swallowed the poison herself.

Sheila survived the poisoning and wound up in prison, where she agreed to divorce Eric and was eventually released. When the issue of Bridget’s paternity test came to light, Stephanie wanted her sent back to jail, so Sheila used Maggie Forrester as a means to gain access to switch out the matriarch’s calcium pills with mercury. She set Maggie up to take the fall for that crime, and was wounded with a fireplace poker for her efforts. James later married Maggie, despite Sheila being pregnant with his child. Sheila gave the couple her baby, Mary, but later gained access to her through newfound friend, Amber Moore. Sheila changed her mind about the adoption and ended up with James, but gradually lost her grip on her sanity through a series of events, including being kidnapped by Mike on Maggie’s orders, that culminated in Sheila threatening to kill Stephanie’s infant grandson, Thomas, and being sent back to prison. Stephanie took over Mary’s care, and Sheila escaped, shot her, and left town with her daughter.

Sheila and Mary, by then known as Erica Lovejoy, later returned to town and schemed to get Amber hooked on drugs again so Rick Forrester would leave her for Erica. When Sheila was exposed, Taylor and Brooke were both shot in the ensuing melee and she again returned to jail, at which time Erica/Mary disowned her. A prison escape saw Sheila, and fellow inmate, Sugar, become involved in a confrontation with Massimo Marone (with whom Sheila had a romantic involvement), Ridge, Nick, and Brooke in South America, during which Sheila claimed to have a baby, Diana, fathered by Massimo, and which ended with her disappearing into the jungle.

Sheila wasn’t heard of again until she turned up in Genoa City, using an alias, after reconnecting with Scott Grainger Jr. in Toronto. She attempted to poison Lauren, and later tried to kill her, with the help of her latest sidekick, Tom Fisher, but he turned the tables on the women and held them both captive in a bomb shelter. They were left there to die, but Sheila helped Lauren get out before the shelter collapsed on her. Sheila changes her appearance.
Sheila was presumed dead again, but Sugar, who had previously had plastic surgery to look like her, attempted to kill Scotty as a means of revenge on her former cellmate. Meanwhile, Sheila underwent plastic surgery to appear as Lauren’s best friend Phyllis. After a series of bizarre events, including being held in a cell in a warehouse by Paul Williams, and escaping and kidnapping Phyllis and her daughter Summer, Sheila found herself in yet another face-off with Lauren, who shot her dead.

Lauren later tangled with Sheila’s sister, Sarah (who had plastic surgery to look like Lauren) and Sheila’s supposed children, Ryder and Daisy Callahan, though Sheila remained ‘dead’ until her recent sudden appearance in Los Angeles claiming to have done her time in prison and looking to make amends. 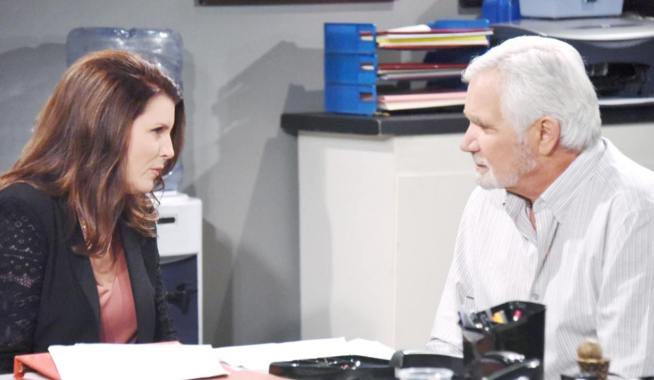 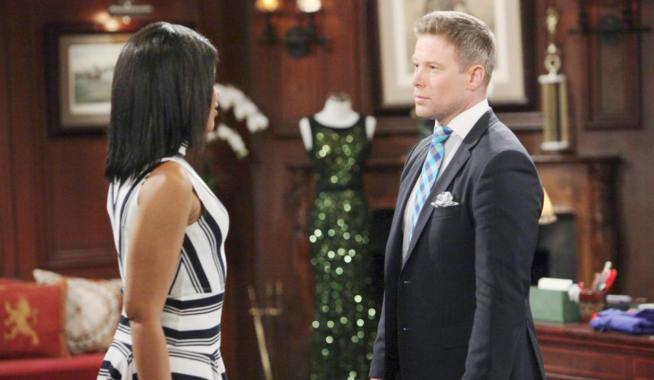