“We will miss her beyond measure.” 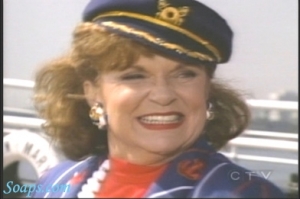 Remember when Sally and Stephanie got drunk and cut "Queenie's" Hair? (Soaps.com)

Bradley Bell, Head Writer and Executive Producer of Bold and the Beautiful had plenty to say about the beloved Darlene Conley upon hearing of her passing on January 14. “She constantly entertained us with every move, every breath, every inflection of her voice. Whether she was the villain, the damsel, the sexpot, or the comedienne, Darlene was brilliant.”

It was only a few months ago that Darlene learned that she had stomach cancer, and true to her nature, she fought it with all she had. The robust actress immediately underwent surgery and then began radiation and chemotherapy. Her prognosis was good,but Soaps.com has learned that she passed away in her home, on Sunday January 14. She was 72.

Darlene’s one-of-a-kind Sally Spectra burst onto the B&B
canvass in 1988. She garnered Daytime Emmy nominations for Outstanding Supporting Actress in the years 1991 and 1992, and was also nominated for six Soap Opera Digest awards. Before Sally was “born”, Conley graced the storylines of other soaps including The Young and the Restless , Days of Our Lives , General Hospital , and Capitol. She felt that daytime TV was her home. “It is really the best medium today for women of a certain age to do something really flashy,” she has said. (Can’t you just see how animated she must have been while saying that?) Undoubtedly, it was Darlene’s love of being “flashy” that put her in the history books of world-famous Madame Tussaud’s wax museum (in Amsterdam and Las Vegas). She is the only daytime star included in the collection! Before she found her home in soap fans’ family rooms every weekday afternoon for the past thirty (or so!) years, Darlene shared her talents in feature films (her first director was Alfred Hitchcock in The Birds!), TV movies, mini-series and staples such as The Mary Tyler Moore Show and Murder, She Wrote. Prior to that, she toured the country in classical theater companies and even appeared on Broadway next to the likes of Richard Chamberlain, Michael York and Jean Stapleton.

Ms. Conley will undoubtedly be missed by her son, Raymond Woodson, two sisters, ex-husband and several nieces and nephews.

We all know that soap fans sometimes can't discern where an actor leaves off and her character begins. What better time than now to recap the magic of Sally Spectra through the years? Whether she was channeling Mae West or a German spy; an Italian gigolo or a countess; a nun or even Massimo Marone, she never failed to entertain with her flamboyant portrayals.

As a young woman, she married the very handsome Adam Alexander. They were a happy family with their little girl Macy. Sally and Adam opened a fashion house that they called Spectra Fashions. Money quickly became a problem, so Adam took out a loan from some shady characters and their lives took a drastic turn. Eventually he had to go into hiding and left Sally to raise Macy on her own � without so much as a goodbye! Always a survivor, Sally found a way to keep Spectra Fashions afloat � even if it wasn't the most scrupulous of ways. She knocked off designs from the best fashion houses. Specifically Forrester Creations.

Although Clarke Garrison was a Forrester designer (and married to Kristen!), Sally was able to coerce him into stealing Forrester designs. She was thrilled to have the inside scoop at Forrester, but Clarke duped her by forking over designs that weren't to be in the Forrester collection. Through the years, she continued to be a very bristly thorn in Eric and Stephanie's side. She and Clarke eventually married and had a son, C.J. She was surrounded by her Spectra employees that she treated like family including Sal, Darla and Clarke. Even though she was the Queen of the knockoff, she never really lost site of her real passion which was to become a fashion icon in her own right. She and Clarke divorced and she had a fling with none other than Stephanie's husband � Eric Forrester! When her songbird of a daughter, Macy, died in a horrible car crash (or so we thought!), it was painful to watch Sally's grief. Her heart was truly bigger than her gorgeous full-sized figure and it showed in every scene she was in.

All of the editors and fans of Soaps.com are deeply saddend by the passing of one of our all-time favorite (and most memorable!) soap stars. Soaps.com hasn't yet learned of how Bold and the Beautiful plans to handle the passing of Darlene (and most likely, Sally Spectra). Fans can rest assured that it will be a fitting tribute to a true soap opera legend.