This is how it should be done.
We've seen Nicole act out her catwalk dreams before, so the scenes with her showing Othello how it should be done seemed a little redundant or like filler, though I found it fun. Some viewers really seemed put off by the runway interlude. Perkiness tends to have that effect on some people, but for me the only issue with the Nicole character is that she hasn't been well-defined. First she was mean, then she was nice. With Wyatt she was drinking and being a sexual young woman, but when dancing on the catwalk with Zende she seemed like a teeny-bopper. She and Zende make a sweet match, but it's not going to be very interesting if they're only given this bubble-gum stuff to play.

Something blue.
Oh my... Julius' ugly tirade, overheard by a devastated Maya, was quite the shocking way to end the Friday episode. Just when we thought he was starting to accept her he let loose with all of that - I could feel Vivienne's rage when she told him to shut up through gritted teeth. So intense. At least now that the truth is out Julius won't be getting a ride on the Forrester coattails, which is what he's had his mind set to do. Otherwise, it was another awesome "B&B" gathering with Bridget's return (wish she'd stay!) and Bill's apology. I wasn't sure what to expect with that, but it resulted in some excellent scenes. Loved that Bill was real about it and so was Maya!

This column represents an opinion. Please share your comments below. 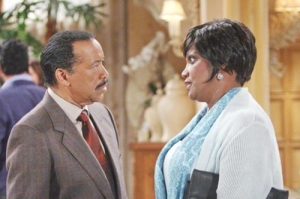 “B&B” hit it out of the park again this week with Caroline’s angst, Thomas’ forbidden attraction, Bridget’s return, Bill’s apology, and the unexpected Friday stunner courtesy of Julius.

Weighing in.
As talked about in last week’s Deconstructing B&B, it’s been fun to have Brooke back in the mix with Caroline, Ridge, and Thomas. She definitely brings some experienced input to the conversations with the younger ones. It’s interesting, too, how they have been pairing her up with Eric in the Rick storyline. It makes one wonder if they will have her go the matriarch route, only to fall back into her old pattern with Ridge if he and Caroline split.

She says no…he says yes.
Well! That was quite the steamy little scenario Thomas was imagining while he rubbed Caroline’s ankles. While I happen to love her with Ridge, after that little daydream there was no question she also shares chemistry with Thomas, and then they threw in the monkey wrench of Ridge not wanting to have children just to really twist up our emotions. It was a bit hard to believe that a man as full of himself as Ridge would be opposed to having more offspring, but nonetheless, the scenes were very realistic. Caroline’s tears had many feeling heartbroken for her. So genuine! She said she would always choose Ridge, but that could change if Thomas manages to catch her attention and is smart enough to sell himself as a potential baby daddy. 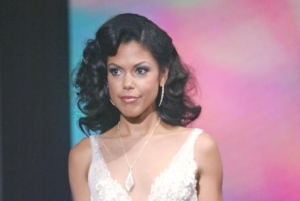