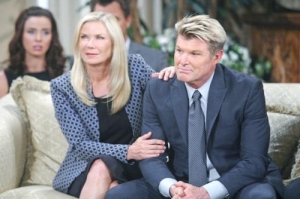 So much delicious drama happening on “B&B,” what with the heavy emotion of Aly’s tragic death and the circumstances surrounding it, and the clashing of Ridge and Thomas. Awesome. Thoughts:

I’ll always love you, baby.
Thorne’s bewilderment, anguish, and anger has been the real deal as he has dealt with the sudden, shocking death of his daughter, Aly. I thought the rest of the family seemed a little subdued; some more crying might have been appropriate given that a young person died unexpectedly. As for Ridge’s speech at the memorial that upset Thorne so much, I was kind of on the fence about him mentioning her mental illness at that time. Understandably he was torn up at her needlessly ending up in that scenario, but it was also understandably upsetting for Thorne.

Just deal with it.
While I can see Ivy’s point of view, she is being uncharacteristically hard-nosed when it comes to Steffy’s actions at the roadside. She’s smart enough to know that if she didn’t see what happened before she began taping, she doesn’t have the whole story to judge – 66% of Soaps.com readers polled in the last Deconstructing B&B felt Steffy was right to strike out at Aly. Also, it might have occurred to Ivy that Steffy doesn’t have a clear recall of what happened that night. It seemed obvious when Ivy confronted Steffy that she didn’t know what she was talking about when she told her to ‘deal with the consequences’, and her flashbacks seemed to fizzle out around the time when she reached for the tire iron. What’s confusing is that when it all went down, Ivy arrived well before Steffy swung at Aly, so why didn’t she get out and intervene as soon as she spotted Aly’s car instead of shooting a video? Also, when it happened, it looked like Steffy was just coming up off the ground when she swung the tire iron up at Aly, but in Ivy’s video, it looks like she’s fully standing and the aggressor…of course. In any case, Ivy feels bad about hiding the video evidence and Wyatt has suggested it should stay hidden ‘because it’s dangerous’. What do you think?

It's not your fault.
Here's the trouble with Liam and his flip-flopping nature - his tagline this week has been 'it's not your fault', yet if/when Ivy's video comes to light, he could be the first one to turn against Steffy. Hopefully he doesn't turn out to be that guy, but I'm not holding my breath. Given that he dumped Ivy at her cousin's memorial and that she has fantastic chemistry with Wyatt, with whom she's been getting closer, Liam could find himself floundering.

More or less like a man.
You had to laugh at Bill's take on Liam breaking up with Ivy. Katie knows Ivy will probably wind up with Wyatt and smiled knowingly at Liam as she said, "I think Ivy will be just fine." Haha, she knows he's not going to like it.

A bit trippy.
I'm on the fence about NuThomas. It's irritating that he's returned with all this unexplained attitude and arrogance toward Ridge. Even if he's good looking it's not enough to root for him when he's so abrasive. That said, he did get a comeuppance when Ridge tore his sketch in half. That took him down a peg!

She's back.
I enjoyed seeing Brooke back in the swing of things - mixing it up with Quinn and Deacon and sniffing around Caroline's office to try and stir up some controversy. Fun!

This blog is an opinion piece. Feel free to use the comment section to express your view.