Did you get last week's poll right? Stephanie thought Brooke had been kissing Whip Jones. 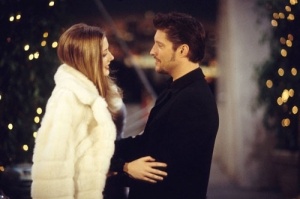 Club scenes are always fun, and Soaps.com is heading back to 2001 when Bridget Forrester entered Deacon Sharpe’s club The Lair with a fake id in this week’s “The Bold and the Beautiful” Throwback Thursday poll…

Bridget is all grown up, has been raising her son and will return to Los Angeles this week. Years ago, she (then played by Jennifer Finnigan) was just a teen and along with her friends made plans to go clubbing. Bridget made sure she had her tracks covered with her mother Brooke before setting out with a fake id and standing in line at The Lair. When Deacon came to the door, he looked at Bridget’s id, with the name Janet, seemed as though he knew it was a fake but let her and her friends in anyway.

Once seated, Bridget became flustered and embarrassed at the way she acted around Deacon. Her friends insisted he liked her and when Bridget looked up, Deacon summonsed her to him. What Deacon did next only had Bridget mesmerized more with his older, sexier charm.

Do you recall what he did to lure Bridget in, after Rick brought Deacon to LA and prior to Brooke and Deacon’s affair?