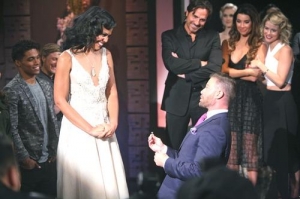 Although the week kicked off with a romantic proposal and engagement, viewers ended the week talking about the stunning unexpected death. Thoughts:

Showstopper.
The fashion show continued on Monday, and as mentioned in the last Deconstructing B&B, had all of the elements that have made such events so fun and fabulous on the show. Aly continued to unravel as the applause rang out, Julius grimaced while Vivienne enthused over Maya, and, of course, Rick proposed to Maya. Even greedy guts Julius put his hands together in approval over the match, which he told his wife, had him looking forward to the champagne days ahead in Los Angeles. So many small moments and one big gesture made for such entertaining scenes.

Serious help.
While there was an after-party going on at the Forrester mansion, the focal point was on Ivy discovering the disturbing collage in Aly’s room and bringing the others into the loop. The scenes were well done, although there could have been a little more panic and action and a little less standing around discussing how unstable Aly had become. You would think the paramount concern would have been for everyone to locate Aly immediately, rather than sit down and recount the tale of Darla’s untimely demise.

Thorne!
Thorne returned to the fold just in time to hear that his daughter was in trouble mentally again, and heartbreakingly, thanks to that commercial flight, he not only missed the fashion show, but arrived too late to save his daughter from her personal demons. So sad!

Another roadside tragedy.
I can't rave enough about the scenes between Aly and Steffy on the side of the highway. At first it seemed anti-climactic when Aly stopped short of running Steffy down...was that it? Then they had an emotionally-charged exchange during which Aly wound up sobbing her heart out in Steffy's arms. Oh the feelings I felt! But wait, then Aly changed her tune yet again and brandished first a tire iron, and then a rock, as she came at Steffy, who by then was at a disadvantage down on the pavement. What a rollercoaster! Then, of course, that thing no one saw coming occurred, Steffy managed to reach the tire iron and struck Aly to defend herself, and Aly fell back and hit her head on a rock. Ivy was there by then and joined the scene as it became apparent that Aly was unconscious and might not come around. Steffy's shock and shaking made it so realistic, and oh, Ivy and Steffy's reactions when the paramedic shook his head...gut-wrenching! As much as we hate to see her go, the surprise outcome and stunning decision to have Aly perish in this scenario was brilliant, as was all of the work from the actresses involved. Bravo!

A terrible accident.
One thing Brad Bell does well is to make scenarios slightly controversial to provoke debate as the story moves forward. Some will see what Steffy did as self-defense; Aly's unfortunate end was tragic, but her own doing, and others will feel Steffy could have done something differently and perhaps prevented Aly's death. Further, Steffy's version of events can only be corroborated by, guess who? Her rival for Liam's affections, Ivy. Soapy perfection. Vote in Soaps.com's B&B Poll: Should Steffy have struck out at Aly?

This blog expresses opinions. Please leave your own comments on the show and/or column below.