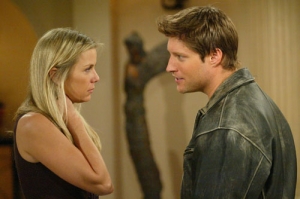 Throwback Thursday this week has Soaps.com recalling a “The Bold and the Beautiful” storyline from 2002 when Stephanie Forrester caught Brooke Logan kissing her daughter Bridget’s husband Deacon Sharpe…

Brooke and Deacon will be interacting soon and haven’t spoken since Hope’s attempt to stop his wedding to Quinn. Years ago, it was a whole lot more than talking that got them into a bind with Stephanie. The Forrester matriarch had entered Brooke’s office to find her kissing a man. She stepped back out and quietly closed the door. Though she didn’t see his face, Stephanie believed she knew who the man was until he strolled up to her in the hallway.

Back inside the office, Brooke and Deacon, who’d been having an affair, heard the door click shut and she quickly moved to lock it. Suddenly, Stephanie tried to enter again and began banging on the door until Brooke opened it. She admitted to having seen Brooke kissing someone and demanded to know who she was hiding. When she saw the shadow from behind a divider screen, she marched over, was appalled to see Deacon and Stephanie lashed out at Brooke.

Who did Stephanie initially believe Brooke was kissing before coming face to face with the man outside Brooke’s office?

Last week's poll answer: Thorne kissed Brooke for the first time after sharing a swim at the Forrester pool.