California Freedom.
Oh, the fashion show was so much of everything we love about "B&B!" It had all the mingling and run-ins a gathering should have, as well as great dresses and jewelry. Liam sneaked away with Steffy to make a commitment to her (thankfully), Wyatt pulled Ivy away from watching the two together, Deacon surprised Quinn, who then spotted him chatting up Brooke, and couples like Ridge and Caroline and Rick and Maya were all smiles. Bill wanted Jarrett to find some juicy scoop and Julius did a lot of muttering about the money spent and how humiliating it all was, but Vivienne was beside herself with excitement. There were a few faces missing (Eric for one), and there can't be a fashion show without viewers feeling nostalgic for Sally, Jackie M, Amber and the like, but Aly is an excellent lurker and could very well prove to be a saboteur as well. Soon we'll find out what deed the sinister floating head of Darla wants her to commit in the name of purity and tradition, I'm sure. Conveniently, Oliver doesn't seem to be anywhere around to talk Aly down, so something is bound to happen. Also, the glaring has gone on long enough. As touched on in the last Deconstructing B&B, the missing link continues to be the lack of explanation for Aly's issues with sexuality. Vote in Soaps.com's B&B Poll: What will Aly do?

Stand up guy.
Who is going to stand up to Julius? As much as Maya's friend Nick is one of the more irritating characters in recent memory, it could be highly entertaining to watch him go a round with Maya's father. Hmm.

This blog is an opinion piece. Please share your thoughts below. 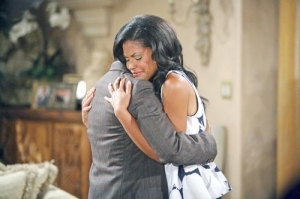 The Avant family drama featured as the week kicked off, and we lost an episode to a pre-emption, but it was all good as the week rounded out with the big fashion show! Thoughts:

My little girl.
Although Julius hugging Maya was a feelgood moment, most viewers were as skeptical as Nicole about his sincerity. Seventy-five percent of Soaps.com viewers polled said they believe what he really wants is the Forrester lifestyle. Only four percent thought he genuinely wanted to build a relationship with Maya. The Avants’ storyline continued to be heavily featured to the dismay of some, and the delight of others. Either way, the acting has been outstanding and Julius in particular has brought some much needed conflict into the whole scenario.

Completely committed.
One aspect of the Maya storyline that continues to niggle is that Rick has become virtually unrecognizable. Overnight he went from a bullying tyrant, who lived and breathed for Forrester Creations, to a happy-go-lucky man who is apparently so drunk on Maya’s love that he gleefully accepted a demotion and went to work for Ridge. Oh yeah, he’s the most jocular guy at the board meetings now – does everything but skip around the table blowing kisses. He even managed to keep a smile pasted on when Julius came into his home and hurled verbal shots at him such as, “What kind of man could love a woman like Maya?” If this had happened two months ago, Rick would surely have pulled a gun on him. It definitely seems Rick is the latest sufferer of “B&B’s” magical personality change phenomenon. It would actually be nice to have realistic Rick in this story.

Malibu meeting of the minds.
So Liam called in Katie and Bill for some help with his waffling issues this week. Bill’s take on it was very clear and no surprise. It was Katie who proved to be a big ol’ pot-stirrer with her remarks about Ivy and Wyatt, which could have made Liam more torn and conflicted than ever. Ack. 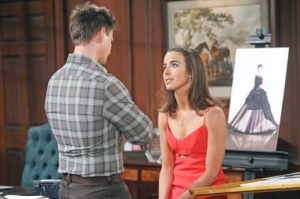