Deconstructing B&B: Fireworks after the Fourth of July 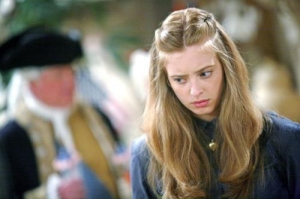 As noted in the last Deconstructing B&B, the show continues to be better than ever, with a great balance happening and a focus on a variety of characters. There was some nice surprise chemistry between two people this week too. Thoughts:

It’s not a holiday unless you relax.
Steffy’s massage surprise for Liam was fun, sexy, and very romantic at the end. It was a nice contrast to the heaviness of Vivienne Avant showing up to take Nicole home, and Aly’s disturbing behavior.

Aly’s wonderland.
Wow, no wonder Aly was upset about having to give up her room for Nicole – she’d have been scrambling to relocate her little house of horrors. Aly had a few more confrontations/meltdowns this week, some more epic than others. Overall people were being very patient, but it was refreshing that they finally put her on notice and tried to give her a reality check at the last meeting. She’s increasingly off-the-wall, complaining about people baring skin at a pool party, and insisting that certain people wouldn’t approve of the California Freedom line. Eric already gave the new line his blessing and previously endorsed Brooke’s Bedroom, Thorne would most certainly approve, and Darla probably would too. She’s definitely not dealing in reality, and as noted before, has some serious issues with sexuality. That said, it was good to see Aly bring up Rick and Maya’s bullying. Many noted that only Maya apologized. Steffy, ironically, seems most concerned about Aly despite being her main target. Aly paid her and Liam a visit to tell them they would be seeing a new side of her, but there’s no question she was faking them out. When she saw them canoodling in the office it looked like her eyes were going to roll back in her head or something. This is most likely the calm before the storm…

Fireworks after the Fourth of July.
At the Forrester mansion, it was cute how Ivy kissed Wyatt on the cheek, and when he put that necklace around her neck from behind at work, it became obvious that they really had chemistry. Who knew? It was a nice touch having Katie tell Ivy what most were thinking too. Anyway, a buzz started about the pair and only grew after Wyatt defended Ivy’s honor to Liam, and when they both later found themselves wondering where to find a love interest to replace Steffy and Liam…totally not realizing the obvious answer – each other! Such a good scene.

I would have been the first to assume that Wyatt and Ivy would be dullsville, but it just goes to show that couple chemistry is unpredictable. It may not exist where you think it would, and may pop up where you least expect it. Wyatt and Ivy could absolutely work - here's hoping they explore it. Vote in Soaps.com's B&B Poll: Should Ivy and Wyatt get together?

I did feel something.
Wyatt was busy this week as he also made the rounds to find Nicole and make his apologies for betraying her confidence. It made Zende maybe a little jealous, and was a nice detail to not have missed...you know, like they missed Brooke reacting to the entire Ridge taking over from Rick situation. Ack...

Julius demands that Nicole come home.
Wow, the Avants certainly hit town with an impact, and it's been a treat. Vivienne is so clearly torn (more leaning toward wanting to put the family back together), and Julius is just that tyrant that is so completely frustrating to deal with. Maya's lingering desire for her parents' approval is something many can relate to, and Nicole having now completely flipped to defending Maya made for some satisfying moments when she spoke up to Julius. Who else thinks his hug/acceptance was phony? Methinks he likes the 'possibilities' he sees at the Forrester mansion.

This article expresses an opinion only. Feel free to share your thoughts below.