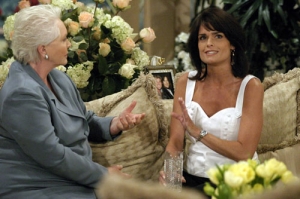 Maya recently had to face her parents after years of them acting as though she didn’t exist. Back then, it was Felicia (then played by Colleen Dion) and her mother who had a difference of opinion, much like when Stephanie slapped Ridge, which turned physical. Stephanie couldn’t stand that Felicia was involved with Zach Hamilton and tried to warn that she would be hurt by his lies. Felicia called Stephanie melodramatic but it only fueled her rage.

Felicia had had enough, told her mother to keep her opinions to herself and turned to leave. Stephanie demanded she not speak to her that way, grabbed her arm and turned Felicia to face her once again. Felicia accused Stephanie of being jealous and trying to destroy her relationship with Zach as a result. When Felicia further explained why she believed her mother was jealous, Stephanie slapped her.

Why did Felicia think Stephanie was jealous of her and Zach’s relationship? Vote from the answers in our poll and leave Soaps.com a comment on who delivers the best daytime slap.

Did you get last week's Throwback answer right? Thorne and Macy were getting ready to make love when Sally and Darla arrived.