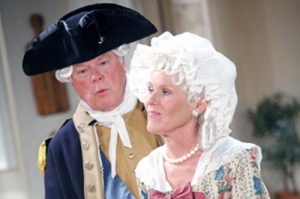 By the end of this week, “B&B” seemed better than ever with the focus remaining on a wide variety of characters, lots happening, and plenty to look forward to. Thoughts:

The annulment.
Thankfully, Liam found enough backbone to go through with the annulment and didn’t manage to get himself talked out of it. Ivy said that no man was worth her dignity…yet she’s agreed to date him while he also dates Steffy. Ack. As mentioned in the last Deconstructing B&B, it would be great to have a rest from the triangle situation for a while.

The interns.
Zende has been a seamless fit so far and seems like he’ll be a good match with Nicole. Far better than Wyatt! I enjoyed watching Nicole and Zende get to know each other. Vote in Soaps.com’s B&B Poll: Zende and Nicole.

Caroline and Maya make amends.
After Ridge’s visit to the Forrester mansion last week, I began to worry about the show centering too much on one character again. Instead of “The Hope Show” we would be watching “Everybody Loves Maya.” The ‘clearing of the air’ between Caroline and Maya had me of two minds. The actresses did a brilliant job portraying the emotions, and there was no denying they were ‘feelgood’ scenes. However, considering Maya’s history with Caroline, it once again didn’t ring entirely true for the characters; it was too much. It would have been more realistic, and more interesting, for Caroline to acknowledge Maya’s bravery and their common ground, but still have lingering mistrust and issues. In any case, it was one big lovefest over at Forrester – Rick was even getting along with Ridge, and called Aly ‘sweetheart’!

California Freedom.
When Ridge announced they were killing the Hope For the Future line my eyes went right to Aly. Hehe! So fun! It's amazing to have a fresh new line for summer and with everyone involved.

Sex, sex, sex!
Wow! So Aly is really going off the deep-end this time. She even seemed to be confusing Steffy with her mother at times during her verbal attacks. As much as she's focused on Steffy, she hasn't forgotten her disdain for Maya and Rick either, which is realistic. Not so realistic is everyone handling Aly with kid gloves, letting her disrupt one meeting after another, and not getting her any help. Someone should have been on the phone with Thorne and/or the men in the white coats by now. But yeah, it's a soap. Aly's psycho looks and scary thoughts, courtesy of the ever-darker floating head of Darla, are chilling and campy, but it was the moments when Steffy reached out to Aly and she let her vulnerability show through that were really effective. This girl has some serious issues though! Not only with her mother having passed away, but with sexuality. I hope they'll explore the reasons behind it. Aly even reamed out her own boyfriend this week about looking at girls in swimsuits. I think it's safe to assume Oliver's not been 'getting any'...eep. Anyway, Aly's ready to 'end' Steffy I guess. Wonder if she still has that axe? Yike!

Fourth of July fireworks.
The photo shoot/Fourth of July party was enjoyable from beginning to end. There was lots of fun and interaction, with the twists of Aly losing it and the arrival of Mama Avant thrown in. Loved Pam and Charlie being in costumes! So looking forward to the summer storylines, more characters returning, the new line for Forrester, and the continuation of the focus on a variety of characters.

This is an opinion piece. Feel free to share your comments below.