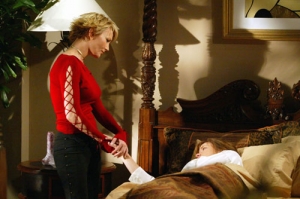 Darla’s head made a few more appearances recently, which proves Aly is experiencing issues again. Years ago, Darla, along with Sally, went to Thorne and Macy’s to make sure she was going to be okay. Macy felt as though she had the flu, leaving Thorne pampering her before her mother and Macy’s best friend Darla paid them a visit. Though they arrived at a very inconvenient time, Thorne let them in.

Everyone fussed over Macy, who tried to change the subject by asking Sally about business. That worked for a little while until Sally’s attention turned back to Macy, who began listing off her symptoms. Darla quickly announced her theory – that Macy was pregnant.

Do you remember what Thorne and Macy were doing when Sally and Darla knocked on their door? Vote your answer in our poll and for fun, let us know if you recall the history of Darla Einstein’s family?

How did you fare in the prior week's Throwback poll? Zende couldn't get over how big the houses were.