Steffy's return.
Having Steffy back in town not only spices up things for Liam, but adds new zest to the takeover concept. As discussed in last week's B&B Breakdown, viewers are still bent on seeing Rick get his comeuppance for his mistreatment of family members and employees as 'Napoleon' and don't want it to come via the transgender angle, but rather by getting a taste of his own medicine, and Steffy's just the girl to do it. If the plan goes off, Steffy would be working with Liam. Do you want them back together or would you rather see her with someone else? Vote in Soaps.com's B&B Poll: Who should Steffy be with?

We decide.
After Ivy overheard Liam talking with Steffy and got filled in on the details about Ridge's takeover plan, the group next informed Eric. Eric, fresh off Rick telling him that Ridge needed to learn his place like Thorne (ugh!), didn't take kindly to the idea of no longer deciding who runs the company. This can't be that cut-and-dried though, so Eric will probably have some sort of counter-plan up his sleeve.

Lost and found.
It turned out Maya had been hiding out in her old apartment over Dayzee's and Carter was the first to figure it out. Rick didn't need to, as Nicole told him. He showed up as she sat in the cafe and pretended to be a waiter just like how they first met there. It was a sweet throwback, but there is still a feeling among many viewers that Rick's reaction to Maya being transgender suited the message of the storyline more than it was true-to-character.

This is an opinion piece only. Please feel free to leave your comments on the column and/or show below! 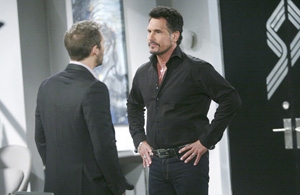 Open your eyes, Bambi.
Liam’s confrontation with Bill had people talking after Monday’s episode. It was entertaining to see the two different men go at it and the exchange kind of set Liam up to accept an offer from Ridge later in the week. I still can’t understand why Bill didn’t use the information about Maya as leverage, though, instead of going right to print.

Time to think.
It’s so frustrating when Eric dithers when making decisions about the company, and Ridge and Rick ‘work’ on him. Honestly, it’s a wonder the company has lasted at all with all the in-fighting and the ever-changing criteria Eric uses to base business decisions on, such as Ridge having stolen his and Rick’s wives. Ack.

Agree to disagree.
Although Caroline and Rick agreed to disagree about Ridge and Maya, they were definitely showing compassion for one another. It’s an interesting development that could herald upcoming controversy as Ridge and Rick do battle.

The Bold And The Beautiful Spoiler Video: Done For Good

The Bold And The Beautiful Saturday Teaser Poll: Wanted 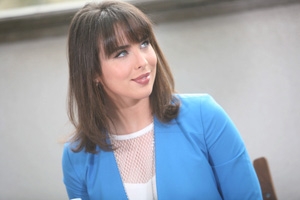