Pointing fingers.
Well there had to be villains in this storyline and right now Bill and Wyatt are it. Of course Katie and Nicole are confrontational and up-in-arms over their behavior, and they have reason, but Nicole should maybe be looking at why she didn't keep quiet as she promised, not to mention she was blackmailing Maya herself just a couple of weeks ago. Katie, for her part, could have warned Brooke and the gang that the stuff was possibly going to hit the fan, but she's right to be upset with Bill for breaking a promise. As for Bill's controversial move, it's beyond me why, after weeks of worrying about Rick sinking the company he holds shares in, Bill would do something himself that could damage it. More realistic would have been for Bill to take what he knew to Rick and force him to resign as CEO in exchange for not printing the story. It would be fun if Bill's story didn't cause any problems for Forrester Creations, but instead only brought him grief. Judging by his reaction to possible recriminations from Karen, it just might.

Not a lie.
On the other side of the coin to Bill is Nick, Maya's transgender friend, who is the voice of the PSA angle in this storyline. While it's fantastic to feature the transgender storyline, the lecture-y air Nick adopted irritated some, while others wondered why he was hanging around Forrester at all when Maya wasn't even there. In any case, Nick stressed that Maya wasn't 'lying', which is all good, but she did make a choice to omit significant details of her personal story for much longer than her partner did.

Caroline's return.
Aw, I really hoped she'd be pregnant with a Ridge baby, but the whole thing with him helping her use her legs again after she helped him to draw again is cute too.

This is strictly an opinion piece. Please give your take below. 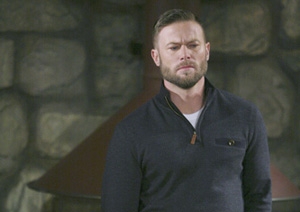 I’m posting observations from Germany this week thanks to recaps from Soaps.com’s Amy Mistretta. The happenings on “B&B” mostly revolved around the aftermath of Rick learning Maya’s secret, and Caroline finally returned. Thoughts:

Please don’t walk away.
Many viewers felt that Rick’s reaction to Maya’s reveal that she is transgender didn’t ring true for his character. After weeks of Rick trumpeting about honesty and integrity, not to mention how testy he is about even the hint of being humiliated, his first reaction should have been anger. In fact, I would have expected him to react much like Carter – furious and shocked initially with acceptance coming gradually. Viewers felt a bit disappointed with writers going with what they refer to as the ‘politically correct’ route. As Hollie mentioned in last week’s B&B Breakdown, most are also still waiting to see Rick get some sort of comeuppance for the way he mistreated the likes of Aly and Ivy too. Oh and for the whining…the never-ending whining about Ridge and his childhood. Maya’s personal life isn’t the appropriate tool through which to punish Rick for his misdeeds, so the transgender storyline sort of interrupted the momentum for payback on ‘Napoleon’.

Manipulative?
Ridge can be just as annoying with his incessant pressurizing of Eric to dump Rick as CEO and reinstate him in his place. At this point, it would look good on both Ridge and Rick if doddering old Eric had a lucid moment and put another Forrester entirely in charge. Would love to see it! Vote in Soaps.com’s B&B Poll: Which Forrester could run the company?

For Rick’s own good.
While Maya stubbornly avoids Rick’s calls and moves forward with her resignation from Forrester, Brooke works to convince her son that Maya flying the coop is for the best. It will be interesting to see how far she’d be willing to go to keep Maya away from him at this point. Shades of Stephanie? 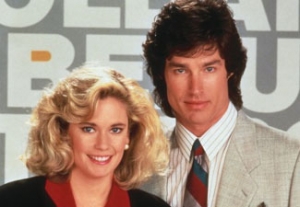 The Bold And The Beautiful Saturday Teaser Poll: Proposal 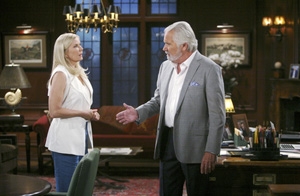