Paragon of virtue.
Ridge went straight to Eric and Brooke with the new information. Notably, none of them blinked an eye about Maya being transgender, it was all about how Rick would implode or explode when he found out she'd kept something this big from him, and how it might affect the company. Brooke confronted Maya and pressured her to come clean to Rick before he proposed. Although I think it is totally up to Maya, who has clearly already waited too long given that Rick is going to be the last one to find out, Brooke made a good point about telling him before he proposed. Maya talked it over with her friend Nick, and envisioned Rick being accepting. Considering how much Rick has bragged about Maya being honest and scandal-free recently, he's bound to be upset to some degree, that's a given.

You can't imagine.
The repetitive conversation over at Spencer Publications about the need to find out Maya's secret was at the point of being ridiculous, so it was a relief that Nicole finally coughed up the secret to Wyatt. What was totally unexpected was Wyatt's reaction. He was only a smidge worried about hurting Nicole, and enthused about firing up the Spencer media machine to blow Rick sky-high. Wow! Of course, that could hurt the company they're looking to take over, so he might want to slow down and think... Is this the way you'd like to see Maya's secret revealed to Rick? Vote in Soaps.com's B&B Poll: How should Rick find out about Maya?

This blog expresses an opinion. Please feel free to weigh in below. We love to read your posts! 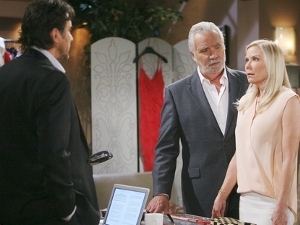 Well this was one of those weeks where the storylines kind of felt like we were putting in time until the May Sweeps stuff kicked into high gear. It looks like that time has come as Friday’s ending definitely had us anticipating next week. Thoughts:

I could live here.
Okay who else has been finding Nicole more obnoxious by the day? As mentioned in last week’s B&B Breakdown, her attitude has been so irksome. First she was going to blackmail Maya, then she wanted her to keep her mouth shut so as not to spoil their ride. Then she goes out with Wyatt and gushes all about his private jet and his beach house instead of him. Kind of a turn-off, but with Friday’s episode came a subtle change. Suddenly she was saying things like she didn’t want Maya to get hurt, and she made herself vulnerable to Wyatt by telling him the secret. Will we end up feeling sorry for her now? Hmm.

Oh Ricky Boy…
Ridge finding out what Maya was keeping from Rick was kind of fun given their high-stakes rivalry. That said, it wasn’t his secret to spread around, so that part of it wasn’t so nice. Also, knowing what Ridge might do with the information, it wasn’t necessarily a good call on Carter’s part to tell him either.

The Bold And The Beautiful Spoiler Video: My Instincts

The Bold And The Beautiful Saturday Teaser Poll: Hot Seat