The stability he craves.
Well, Rick and his ring are going to get knocked for a loop. He has put Maya on a pedestal of perfection that no one could live up to anyway, but the true test is coming as to whether he really loves her or just the ideal she represents in his mind.

Chasing monkeys.
Ridge's super-frustrated conversation with Eric was a thing of beauty. He was saying everything that viewers wanted him to - hollering at Eric to wake up and see what's really been going on while he's been away chasing monkeys. Haha, so good! Brooke entered the fray and that ended up with Ridge quitting. She then tried to tell him he couldn't quit - not surprisingly he ignored Miss Bossy Boots. After, Eric and Brooke debated about whether he would really go. How great would it be if he really did leave and started his own fashion house to beat Rick at his own game? I so miss the days of two fashion houses! Vote in Soaps.com's B&B Poll: Should Ridge start a new fashion house?

Spit it out.
Oh the drama! That was quite the drawn-out reveal when Carter told Ridge about Maya. When he finally intoned gravely, "Maya Avant is transgender," I got a chill down my spine. The way he delivered that line was like he was telling Ridge she was a serial killer. Eep! So I guess this might intrigue Ridge enough to keep him around. This puts the Spencer boys behind Ridge now in their quest, and yet another person knows the truth about Maya before Rick - and it's Ridge of all people! You just know that will burn Rick's butt.

Honeymooners.
No Deacon and Quinn this week. One can only imagine what they're up to! 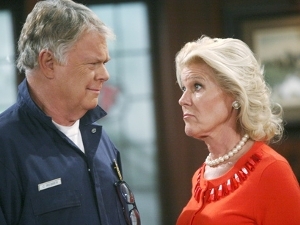 Our duty.
Pam was dying to figure out Maya’s secret once she heard about its existence and she got a little more than she bargained for when she brought Charlie on board. Together they rationalized spilling the contents of Maya’s purse and then immediately zeroed in on the estrogen pills. Charlie instantly deduced that Maya was transgender. Hah! This would be believable if Charlie knew someone who had transitioned, otherwise it’s not the obvious conclusion to jump to, but in any case, Pam, terrified that Charlie was going to announce this to the company at large, swore him to silence so they wouldn’t risk losing their jobs. It was hysterical when Rick caught them in his office and Charlie hinted that they were getting frisky in there because Pam’s an adrenaline junkie. Too funny! Can’t wait until they find out Charlie was right about Maya…

I had that gold-digger pegged.
There’s nothing like Bill on a mission, but he’s being decidedly too laid back about this one. It’s getting old listening to the Spencers stand around and talk endlessly about discovering the secret and ousting Rick. It’s becoming increasingly clear that Wyatt isn’t going to get that secret out of Nicole, and even if he did, as mentioned in last week’s B&B Breakdown he probably won’t be willing to hurt her by using it.

Enjoy the ride.
Nicole’s immature, selfish attitude about essentially everything irks me. It was satisfying to hear Maya remind Nicole that her relationship with Rick isn’t a ‘ride’, it’s her life. Carter also had several encounters with Nicole. It was laugh out loud funny when he saw her yet again by the workout equipment and asked, “Are you always here now?” Just what we were thinking, Carter!

The Bold And The Beautiful Spoiler Video: Winning

The Bold And The Beautiful Saturday Teaser Poll: Accusation