Personal sweatshop.
Oh, Ivy confronting Rick and Maya was good! She really stood her ground, and even went so far as to kick off her shoes and invite Maya to massage her feet. So satisfying. This really helped let off some of the steam that had been building up with Rick's continued mistreatment of his relatives. Why would he give Nicole Aly's room when there are empty ones? Frankly, it's not only been obnoxious, but surprising considering the close proximity of Eric. In any case, Rick found the key to shutting Ivy down - by saying her work wasn't up to snuff, so it was back to complaining behind his back by week's end. What a group meeting, with Eric giving Rick all the credit and supporting him to the point of making the others nauseous. I'm pretty sure Rick wouldn't be raking in profits if his designers resigned. Sigh.

We both made mistakes.
Rick got a little melancholy over the divorce papers meeting - to a degree that Carter asked if he really wanted to go through with it. It is nearly impossible to feel bad for Rick with regard to Caroline or anything else at this juncture, and yet when he's alone and not posturing, you can sometimes sense his vulnerability and eke out a teensy smidge of sympathy... and that's good soap.

Lies of omission.
Well Nicole is certainly stirring things up with Maya. What on earth could Nicole know about Maya that is so life-altering? It's definitely intriguing. Any guesses? Leave them in the comment section. 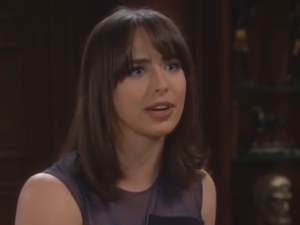 The fun stuff this week was Brooke messing with Quinn, Ivy confronting Rick, and Nicole winding Maya up over this big secret. Lots happening! Thoughts:

Badge of shame.
The Quinn and Brooke clashes were brilliant, but the fun of the musical visits to Brooke’s living room wore off when Brooke told Deacon there was no chance for them. It was good that Deacon asked, since, as mentioned in last week’s B&B Breakdown, it was hard to buy him walking away from her if there was any hope. Later, Brooke fell and hit her head. She woke up a disheveled mess the next day and took delivery of a case of vodka she didn’t remember ordering. Yike! Off to AA. Over at the warehouse, Deacon, who has only been seen drinking casually for months also felt a sudden urgency to get clean and – what a coincidence – he ended up at the same meeting as Brooke. Gah. This will no doubt lead to Quinn becoming increasingly incensed and homicidal as Brooke calls up Deacon every time she wants to take a drink.

Welcome to my life.
Wyatt made the rounds with head hung low and divorce papers in hand this week. He and Brooke bonded over being adrift, which led some to muse about a possible connection of some sort happening between them. After all, Brooke has been known to be drawn to her daughters’ significant others and has a hate-on for Quinn. What better way to provoke her than to bed her son? Vote in Soaps.com’s B&B Poll: Should Brooke hook up with Wyatt?

The Bold And The Beautiful Spoiler Video: Stay

The Bold And The Beautiful Saturday Teaser Poll: Tension