Happy 28th Anniversary The Bold And The Beautiful

Only on a soap opera.
The pilot episodes of "The Bold and the Beautiful" focused on preparations for the wedding of Ridge Forrester (then Ronn Moss) to Caroline Spencer (Joanna Johnson). Today, Ridge (Thorsten Kaye) is sleeping with the late Caroline's niece, also named Caroline Spencer (Linsey Godfrey).

Daily recaps.
Soaps.com began doing daily updates of each episode of "B&B" back on Monday August 7, 2006. For a look at that recap and to read more interesting trivia on the show, please take a look back to when B&B's Ridge kissed Donna. Happy 27th Anniversary The Bold and the Beautiful.

Check out a video interview with B&B and Y&R actresses on Hollywood. 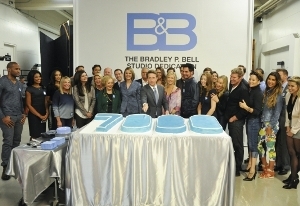 “B&B,” which hit the 7000th episode milestone in January, will celebrate 28 years on the air on Monday March 23 (the daytime drama debuted on March 23, 1987). The show’s head writer and executive producer, Bradley Bell made this statement in a press release:

“Twenty-eight years on television is a tremendous achievement. I work with a brilliant ensemble of cast, production crew, writers and staff. I am grateful to CBS for their unwavering support and for their longstanding commitment to ‘The Bold and the Beautiful’. None of this would be possible without the steadfast loyalty and dedication of our fans around the world.”

In honor of “B&B’s” 28th anniversary, Soaps.com dug up some interesting trivia about the CBS soap.

Age gap?
Lesley-Anne Down played Jacqueline Payne Marone, the mother of Jack Wagner’s Nick Marone, but she was actually only five years older than him in real-life.

The Bold And The Beautiful Saturday Teaser Poll: Support

The Bold And The Beautiful Spoiler Video: Tell Me