Also, vote in our Genoa City Throwback Thursday poll surrounding Y&R's Jack introducing Keemo to the Abbotts and read Soaps.com's Where Are They Now column for details on "As the World Turns" alum (ex-Frannie) Julianne Moore's Oscar win, as well as details on her upcoming movie. 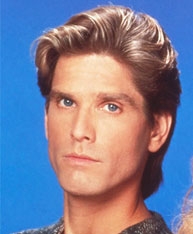 In his brother’s shadow.

In this week’s “The Bold and the Beautiful” Throwback Thursday Soaps.com takes readers back to 1987 when Thorne Forrester was reminded by his brother Ridge and Bill Spencer Sr. that he would always come second best at Forrester Creations…

These days Ridge is playing second fiddle to Rick at Forrester. Years ago, Ridge was Eric’s right-hand man, a fact that always was a sore subject with Thorne (then played by Clayton Norcross). Ridge had been lounging by the family pool, where Thorne found him in a foul mood. While the brothers discussed work, Ridge claimed he was peeved due to a recently published article about the company. Thorne figured there was more to it, considering their father Eric had no issues with the write-up, and accused Ridge of being upset about the girl who wrote it.

Ridge admitted he didn’t want his old girlfriend, Alex Simpson, sniffing around and berated Thorne for talking to her for the piece. He reminded Thorne of his place in the company and how his word would always override Thorne’s. Ridge walked away with his arrogance intact, leaving Thorne to take a call from Bill. When Thorne went to Bill’s office, he was once again reminded of the situation with Ridge at Forrester and their mutual admiration for his daughter Caroline. Bill then offered Thorne a job at Spencer Publications.

Do you remember what prompted Bill to offer Thorne a job? Vote in our “B&B” poll and please leave us a comment or two on past and current storylines in the section below.

The Bold And The Beautiful Spoiler Video: Walks Out

The Bold And The Beautiful Spoiler Video: Why Now?