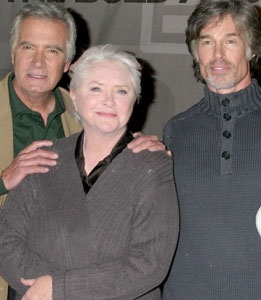 In this week’s “The Bold and the Beautiful” Throwback Thursday Soaps.com takes readers back to 1988 when Stephanie Forrester slapped her son Ridge hard across the face during a heated argument…

Quinn recently accepted Deacon’s marriage proposal. Years ago, it was the timing of Eric’s marriage proposal to Stephanie that had Ridge up in arms. Ridge began to suspect that Eric only married Stephanie because she’d gotten pregnant with him unexpectedly. He confronted his mother and after a bit of badgering Stephanie admitted it’d been true. Though she tried to reason with Ridge and assured him that she and Eric loved each other, he believed Eric only proposed to her because it was the honorable thing to do.

As Ridge hammered on, Stephanie insisted that Eric would have married her regardless of a pregnancy. However, Ridge brought up Eric’s feelings for Liz Henderson and made a comment that set Stephanie off, which led to a hard slap across his face.

Do you remember what Ridge said that made Stephanie slap him? Vote in our “B&B” poll and leave us your thoughts on the current storylines, as well as your past favorites in the section below.

The Bold And The Beautiful Spoiler Video: Inspiration

The Bold And The Beautiful Spoiler Video: Reclaim