It's our time.
What was with Maya dissing her sister who has no place to live? Ouch. There must be some history there - perhaps Nicole has stolen a man from Maya in the past? She sure didn't want her around the mansion - to the point where she was rude. Later, Rick gifted Maya with an odd-looking but expensive necklace that she was clearly hoping would be a huge honking diamond engagement ring. Better luck next time, Maya!

Bad choices.
I'm not sure why Katie would have wanted to honeymoon in the place where Bill fell in love with Brooke, or why she'd keep bringing her sister's name up while they were there, but aside from that the scenes were romantic and sexy. They are such a hot couple and Bill was shirtless for so long! Katie messing with Bill's sword necklace may not prove to be a good thing, but we'll see. Oh, and for those keeping score at home, Donna was babysitting Will. As mentioned in last week's B&B Breakdown, Donna needs a storyline asap.

That was new.
Deacon and Quinn had mind-blowing sex, after which he ran out for takeout and ran into Brooke. Being a gentleman, sort of, Deacon took her drunken butt home. As a couple of very hot kisses were happening between them, Wyatt was planting seeds of doubt about Deacon in Quinn's mind. Yike. Brooke and Deacon have fantastic chemistry so it was tempting to have him give in, but then Brooke was being insensitive, so it was good he walked out. He faced a grilling at home and enough was revealed that Quinn felt she needed to pay Brooke a visit - and slap her to the floor. Holy smokes! 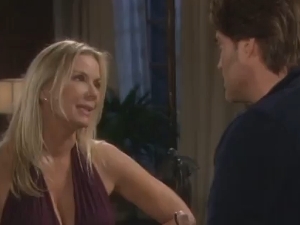 It was another solid week on “B&B” across the board. Steffy vs Ivy, drunk Brooke, and shirtless Bill provided the spice. Thoughts:

Back off now.
One couldn’t help but be impressed at Ivy going toe-to-toe with Steffy – her outspokenness has been one of her best qualities since day one. The verbal lashes got pretty intense and direct on both sides – it’s a wonder the catfight didn’t get physical. While Liam may have resisted Steffy’s advances for now, just give her time. Ivy and Liam are a solid couple now, but she comes across almost stuffy compared to livewire Steffy, and Tofu Boy likes to walk on the wild side as we know. One little tiff with Ivy and that’s all it will take. If Steffy sticks around it’s a good bet she’ll come between them. Some have speculated that Steffy and Wyatt would make a good pair, but other than using him to make Liam jealous, I can’t see it. Maybe it has something to do with considering Wyatt to have been the ‘male Steffy’ in the triangle with Hope. Vote in Soaps.com’s B&B Poll: Would Steffy and Wyatt be a good couple?

Little Napoleon.
There were a lot of happy message board posters when they heard their favorite nickname for Rick – Napoleon – used on the show. Too funny. Well it was more of the same at Forrester Creations this week as Eric refused to budge from his pro-Rick stance despite the impassioned pleas of Ridge’s assembled group to change his mind. Just as they might have been making headway, Rick ordered everyone to a meeting and duped Eric again by offering apologies all around. It was entertaining to see Ridge’s outrage and hear him saying what we were thinking – he’s playing all of you!

Join forces.
Liam had perfect timing for approaching Ridge with the takeover plan – Ridge was still seething over Rick conning everyone and fresh off their ensuing confrontation. Steffy later picked up where Liam left off, pressing Ridge that they must take action to get Liam, er, Forrester Creations back.

Special scotch.
Brooke and Eric toasted to their son and all his profits, giving no credit to anyone else. It was a perfect excuse for Brooke to get her drink on, and for Eric to give us a glimpse into why he’s maybe taking Rick’s side – Ridge once took his woman from him too. Hmm.

The Bold And The Beautiful Spoiler Video: History