His reward?
Having mopey Quinn and house-hubby Deacon sequestered over at her place holding the same conversation repeatedly is starting to get old. She sulks about Wyatt and Hope or Brooke and he reassures her with the whole 'me Tarzan, you Jane' bit about how she's got her man and doesn't need anything else. Quinn dusted off her dominatrix get-up, which got an enthusiastic response from Deacon - that was fun - but it's time these two were back out in the world making things happen. When Deacon was at Brooke's there was a real pull for them to kiss, but they didn't. They should spice things up by having Deacon 'slip' and have sex with Brooke. It would be a fun throwback to Deacon and Brooke's unforgettable sex scenes from back in the day, and Brooke would also get even for Quinn having sex with Bill. Vote in Soaps.com's B&B Poll: Should Deacon hook up with Brooke?

Proud of you.
Once again, Eric had viewers questioning whether he's going senile by putting his support behind Rick, who has been a tyrannical disaster. It seems the sales figures trumped all this time. One never knows what Eric's decisions will be based on anymore. Anyway, many felt Eric was coddling Rick and others were torn. It was undeniably heartwarming to see Rick win the approval of his father, but unfortunately, aside from the numbers, he really didn't deserve it. Will Rick be a warm fuzzy CEO now? As for Caroline and Ridge, they were both very confident that Eric would kick Rick to the curb and were left speechless by his announcement that he was behind Rick all the way. Their next run-in with Maya could be a little uncomfortable after all of that verbal sparring.

Take the plunge.
As mentioned in last week's B&B Breakdown, we're back to the Steffy we know and love (or love to hate), and she certainly did a bang up job of reminding Liam how fun and sexy she can be. Once he admitted that she'd broken his heart, the old chemistry was really in the air. It truly looked like he would be unable to resist Steffy, but then Ivy appeared. Fresh off a warning from Wyatt, she had hightailed it over there and looked none too happy to see what was going on! Will she interrupt or run off? 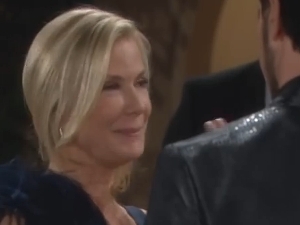 Once again there was plenty happening on “B&B,” what with a wedding, Eric’s return, and Steffy working her wiles on Liam. Thoughts:

Second time’s the charm.
While some questioned Katie rushing back into marriage with Bill given everything that had happened, there was a certain inevitability about the whole thing once he had charmed his way into her good graces again – why not get on with it? Katie asking Brooke to be her matron of honor, on the other hand, was something that would only happen on a soap considering the circumstances. In reality, Brooke probably wouldn’t even want to attend the wedding or be particularly welcome. All the gushing about being sisters is pretty unbelievable in light of everything that’s happened. More realistic is Donna teasing about being chopped liver. Really! Donna needs a story and/or a man stat.

The stupid tree.
Over at Forrester Creations, Rick, with Maya snickering by his side, hit new lows, taking his schoolyard bullying to cruel levels by mocking Ivy and Aly’s jewelry and shoe designs. Something tells me if Eric had heard recordings of Rick behaving this way toward his employees/family members there might have been a different outcome later on.

Cool!
Brooke’s shenanigans at Bill and Katie’s wedding ceremony were kind of a hoot, and didn’t ultimately take away from the heartfelt vows they made to each other. Brooke being tipsy added a satisfying air of uncertainty to the proceedings – would she suddenly blurt that she was still in love with Bill? The sidelong glances and awkward looks exchanged among the guests with each slightly inappropriate move Brooke made were funny too. Some viewers commented about Carter noticing what a beautiful woman Brooke is, and wondered if they might hook up.

The Bold And The Beautiful Spoiler Video: Fair?

The Bold And The Beautiful Saturday Teaser Poll: Concern