Licking his loafers.
Though it really wasn't clear why Liam and Bill needed Wyatt 'on the inside' at Forrester, it made for a couple good scenes when Wyatt had to grovel for his job back from Rick. It's fun how the writers are going out of their way to make Rick ultra-obnoxious and smug right now (Aly and the ice cream!) so that his comeuppance will be super-satisfying. Love it.

I kinda' like that chair.
Now that was the Steffy we know and love in Rick's office. Striding around the room, smirking at his suggestion she might need to win brownie points with him, sitting in his chair with her feet on his desk, and finally warning him not to get too comfortable. Yes!

It's a game-changer.
Liam's plan to take over Forrester will be a game-changer in more ways than one if he dumps Ivy and gets back together with Steffy to make it happen. Bill, recently on hiatus from meddling while he won back Katie, returned in fine form and let Liam know exactly what he should be doing. Ivy, who probably has more integrity than any soap character I can think of, encouraged Steffy to do the takeover with Liam, even after she learned she was still in love with him. Ivy wants what's best for the company and trusts Liam. Steffy countered that she has no intention of settling for just the company. Here's hoping this isn't the set-up for another triangle featuring a hapless Liam. We've been 'triangled' to death and would like to see this take another angle. 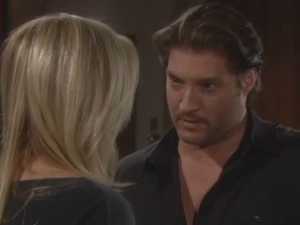 Wow, “B&B” is truly getting back to being a must-see soap opera. It was a bit of a mystery why the show for so long seemed to revolve relentlessly around the Hope character, and rising ratings seem to confirm that viewers prefer the more adult feel and the expanded focus that now includes everyone’s loves, lives, and businesses. Still on the wish list? A rival fashion house with quirky personalities to compete with Forrester Creations. Thoughts:

Paint me.
As mentioned in last week’s B&B Breakdown, the sexual tension between Ridge and Caroline had built to the point where you could hardly take a breath when they were alone together in a room. They finally took that intimacy to the next level. The sensuality of the body painting, sheets, and candlelight were perfect for an artist and his muse. The morning light didn’t break the spell either. Just ask Brooke.

Pressing plans.
Brooke perhaps got a little overconfident about her ability to reel Ridge back in time after time. But you can’t blame her – as Pam and Donna said, it is what has always happened in the past. For now, though, it seems Ridge is too enthralled with the young creative beauty Caroline to be tempted by anything Brooke might be dangling in front of him. After Friday’s episode, it appears even Deacon will be passing on Brooke’s delights, so she really is without a man. Different! It looks like the drinking is going to be her means of coping. Vote in Soaps.com’s B&B Poll: Brooke without a man.

The Bold And The Beautiful Spoiler Video: Fix It