Dark energy.
The story of the week was Brooke's bizarre behavior at Forrester. As mentioned in last week's B&B Breakdown, we couldn't wait for Brooke to react to Caroline and Ridge's indiscretion, but we never saw that coming. After hearing Donna describe the dark atmosphere at Forrester and how scary Rick had become, and knowing he had shot a gun, she went over to the company and read the riot act to...Ridge. Not only was it obvious that her 'orders' were coming from a place of jealousy over Ridge and Caroline, but things got even nuttier when she announced that Rick would be staying in his marriage and demanded that he tell Caroline he forgives her. Yep, she didn't seem able to grasp that way too much had happened, despite everyone trying to tell her. It was actually kind of fascinating since it was so unexpected. Vote in Soaps.com's B&B Poll: Was Brooke acting out of jealousy?

Dynamic duo.
I wish there were more scenes with Pam and Donna. What a hoot they were on Friday's episode with Pam typing up their resignations. Hilarious.

Takeover.
Bill being proud of tofu-boy ("It's almost like you've been eating meat.") was feelgood fun, but isn't anyone going to point out that Liam might be a little in over his head trying to run Forrester Creations given his work history?

Cha cha cha.
She's baaack! It was interesting to see Steffy back in control as a sexy self-assured woman doing business with Liam, as she was so often reduced to an emotional mess over him in the past. It will be very interesting to see if they can work out a deal, and what her take on it will be. 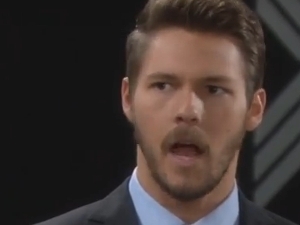 There were confrontations and plots brewing, but the week took on a weird vibe when Brooke finally made her way over to Forrester. Thoughts:

The cradle robber and the shooter.
It was Rick’s version of the Wild West over at Forrester Creations this week as he shot at Ridge and Caroline ostensibly to get the ‘cradle robber’ off his ‘wife’. I’m surprised Maya didn’t take more offense to him being so clearly jealous of Ridge and Caroline. Of course, she supports Rick 150% no matter what. He can shoot up the whole dang company if he likes as long as she gets to live in the Forrester mansion. Ack.

Waffles.
Ivy is a cool chick, and her romance with Liam is sweet and stable. In soaps, unfortunately, this spells dull and doomed. Steffy hadn’t even walked through Liam’s door yet and the electricity was zapping and zinging through the air between them. And that right there is the difference, folks.

You walked out.
The scene between Brooke and Bill was a nice dose of reality. Bill, being who he is, needed to address someone walking out on him and refusing contact. What a blow to his ego! He also needed to save face by letting Brooke know he was getting back with Katie. Also refreshing was Liam and Katie’s candid conversation about work and her reuniting with Bill. Liam’s comment that she could do better than his dad, but she makes him a better person, was on point.

What gives?
Former force-to-be-reckoned-with Quinn seems to be morphing into an insecure whiner before our eyes. Soon Wyatt will be back and she’ll be whining about his circumstances too. She’s been a wreck since Hope fell down those stairs.

The Bold And The Beautiful Spoiler Video: Displeasure

The Bold And The Beautiful Saturday Teaser Poll: Harsh