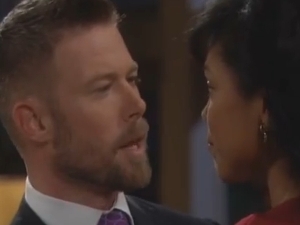 As mentioned in last week’s B&B Breakdown, the Maya/Caroline/Rick/Ridge material has made for amazing viewing and continued to do so with the latest twist – Caroline ending up back in Ridge’s arms. If you’re keeping track, this is still better than anything we saw in Hope’s endless triangles and tribulations. These are adults playing adult high-stakes games. Love it. Thoughts:

Played for a fool.
The big talk this week in Forrester Creations circles was that Rick’s actions are all about getting back at Caroline. It’s probably true, and he is also getting back at Ridge – not just for Caroline, but for all the perceived slights he’s suffered in the past. On the other side of this is Rick’s gang – Maya and Othello – supporting his every move and taking his words and actions at face value. If it’s true that Rick has done much of this to get back at Caroline, he surpassed the mark and his revenge took on a life of its own. He told Maya he loved her when she pushed the issue, but does he really believe it? Where do you stand? Vote in Soaps.com’s B&B Poll: Are Rick’s actions about revenge?

Offended.
If Ivy and Aly are so offended by what Rick is doing at the Forrester mansion, why don’t they contact Eric and let him know? So irksome. I was also hoping to see Pam cook up some just desserts for Rick and Maya since she was so steamed about Stephanie’s portrait.

I won't run.
Ack, who knew? Ridge and Caroline are amazing together. It's partly the sensual chemistry they established when designing together and partly the deliciousness of knowing Rick will be getting what's coming to him for taking things too far. This probably isn't a relationship that's right for the long haul, but it's right for now. They give each other a fun sexy energy. How cute that Caroline was worried about what Uncle Bill will think. Uncle Bill, my dear, will be apoplectic. Can't wait! Caroline gushing about Ridge to Ivy made for one of my favorite moments of the week when Ivy blurted out, "It's weird that you're so happy." Too funny. Ivy's so real.

Posted 38 mins ago
Posted on: TVLine