He may appreciate Maya's loyalty, but he's still in love with his wife. That said, he is maybe too preoccupied with revenge to see that he's not exactly making friends and allies. He's upset Ivy, crazy Aly, crazy Pam, his two main designers, and it's only a matter of time before the news travels to Uncle Bill. Rick also may not be considering that if he ticks Caroline off enough she might remove herself as a target or strike back. She could divorce him and take half, take up with Ridge again, and leave the company, for starters. Weigh in on the portrait situation in Soaps.com's B&B Poll: Rick's portrait swap.

She gets what she wants.
The Caroline/Rick/Maya confrontation scenes have been amazing soap viewing and here's why. All three characters are showing their angry dark sides and most vulnerable sides as this plays out. We are being pulled in different directions all the time. One minute we want Rick and Caroline back together, the next we want something else. No matter which two are having it out it's intense! The actors are just doing an incredible job with this storyline. And can we just say it - this is so much better than the Hope/Liam stuff we've been held hostage by for eons. 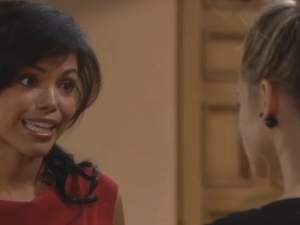 This week was all about the fallout from Rick making his big move at Forrester…and later into the Forrester mansion. My thoughts:

On vacation.
After all Eric’s back and forth between being appalled at Rick and supporting him, it’s clear the old codger doesn’t even really know what he thinks anymore. Eric told Rick he was hateful and deceitful and totally out of control, but he didn’t seem to have the energy to do much about it. He fell back on ‘it’s only for a year’ and pretty much let Rick push him onto the next flight out. Did he even go back to the house before he left? If he did, he might have noticed Maya already moving in – too funny! She sure didn’t waste any time.

Worked too well.
Eric may be fading, but still had enough savvy to call Ridge out on him exerting his powers over Caroline and it ‘working a little too well’. Ridge didn’t argue the point and seems a little dazed over the turn things have taken.

Forrester mansion shenanigans.
In last week’s B&B Breakdown we wondered if Rick and Maya would pull off their plan to nab irrevocable power and they did. Rick continued his tyranny over at the Forrester mansion, where he had Maya put Ivy and Aly out of their home for the night, and then had the audacity to remove Stephanie’s glaring portrait and replace it with an equally scary one of Maya. What everyone believes is clearly true – Rick has a one-track mind right now, and it is all about lashing back at Caroline.

The Bold And The Beautiful Spoiler Video: Come Home

The Bold And The Beautiful Saturday Teaser Poll: Threat