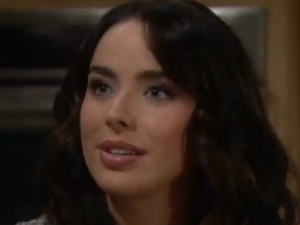 It’s been an eventful week on “B&B” with the focus on a variety of different characters and relationships! Thoughts:

Crawl out of my own skin.
Bill egged Quinn on as she stood on the ledge of the building, but I wonder how he would have reacted if she’d actually jumped? Deacon saved the day, of course, but Quinn’s self-loathing continued. The awareness she’s lacked throughout all of her scheming finally kicked in when her actions hurt her personally. Does she deserve to feel this pain as karmic payback? Leave your thoughts in the comment section below.

On the hook.
Rick’s plan is totally smarmy. There’s no problem with him wanting to be with Maya if he feels too betrayed by Caroline, but the way he’s going about it, which involves lying and scamming his own father as well, is slimy. As for Maya, although we still see glimpses of the wide-eyed girl we first knew, they are few and far between. With Rick lying and Maya bragging to Othello about how the apartment is only temporary until she gets her own mansion, it’s all getting fairly unsavory. It’s not a problem for Maya to want Rick, or even for her to give Caroline back a little of the same treatment she dished out herself previously, it’s more Maya’s gold-digger talk that is so unappealing.

Witness.
How delicious that Ivy witnessed Rick kissing Maya at the apartment, and even better was the confrontation in the Forrester kitchen. Rick looked all steely-eyed and threatening once he realized Ivy wasn’t buying his ‘goodbye kiss’ routine, but Ivy didn’t flinch. Vote in Soaps.com’s B&B Poll: Should Ivy keep Rick’s secret?

Do you love her?
So, Katie set up a romantic evening to dump Ridge? Hehe. It was kind of a different way for a couple to part ways on a soap opera. No dramatics, just a realistic conversation about the state of the relationship, some regret, and a kiss. It sort of ended the way it began...with quiet mutual understanding.

Sudden desire.
Wow. As mentioned in last week's B&B Breakdown, Bill planted that one hot kiss on Katie, and the rest, as they say, is history. Many had forgotten the kind of chemistry and connection Katie and Bill were capable of when they went through her post-partum depression and his affair with Brooke. Their reunion felt like coming home.