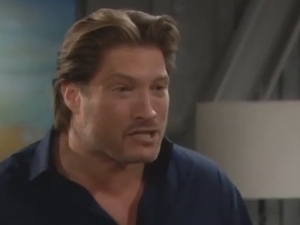 This week focused solely on the storyline surrounding Hope losing the baby and it was also her last week on the canvas. Thoughts:

He’s gone.
It obviously took Wyatt a little longer to come to terms with how dangerous Quinn could be because she’s his mother. In any case, it was Liam who came to Hope’s assistance after she fell down the stairs and rushed her to the hospital. As predicted in last week’s “B&B” Breakdown, Liam didn’t believe Quinn was innocent. Liam was also the one who comforted Hope over the loss of the baby while Wyatt argued with Deacon over the need to put a restraining order on Quinn, having no idea it was already too late. Ack.

Problems in the family.
In another ironic twist, Deacon and Bill finally found something they could agree on – that a restraining order would allow Quinn to show she could ‘behave’ for a period of time which would maybe lead to Hope letting her back in the fold at some point – this as Wyatt was rushing to the hospital following a shocking encounter with a deeply rattled Quinn only to learn the baby was gone and it was a boy.

All you had to do.
The most dramatic episode with the most powerful performances was without a doubt Wednesday, when Deacon reacted to Quinn telling him Hope had fallen down the stairs. “All you had to do was leave her alone!” So good. The bad news then spread as Liam made calls and Spencers and Logans rallied around Hope and Wyatt at the hospital. Very emotional. At the episode’s end, Deacon called Quinn and told her the baby was gone. We didn’t even hear what he said, and say what you will about Quinn, her anguish was palpable.

That's over.
In the aftermath, Hope, who had grieved with Wyatt at the hospital, underwent some sort of change of heart and turned on her hubby for not protecting her from his mother. She even coldly told him the only reason they were married was because of his mother engineering it. Thankfully he corrected her by saying she married him for the same reason she's thinking of leaving him - she always wants what she doesn't have. Bam! He also pointed out that no one forced her to marry him and that Quinn didn't engineer the baby. It didn't seem to make much of an impression on her as she walked out anyway. Meanwhile, Liam went to pay yet another visit to Quinn. It's a little odd how he always goes to confront her. She also got a visit from Wyatt, who told her he's had enough of her obsessive love and disowned her. Will it stick? We'll believe it when we see it.

Sins of the father.
Katie checked in on Bill, who wondered if his sons losing their babies was bad karma from him, but then warmed to the idea of blaming it all on Quinn. Those who have been feeling a Katie and Bill re-do coming on were not disappointed - that was one hot kiss he planted on her! String, ribbon, who cares after that! Liam, meanwhile, was the last to spend time with sad, departing Hope, who announced she would go to Milan to be with Brooke for now. For fans of Hope it was a sad day, while for those who have not been fans of 'The Hope Show', it was a day for rejoicing. As for the role being recast, we'll do a Scarlett O'Hara and think about that tomorrow... Vote in Soaps.com's B&B Poll: Will you miss Hope?