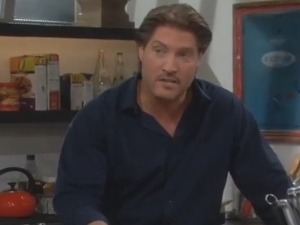 Off my property! (CBS)

“The Bold and the Beautiful” for the week of December 1 – 5:

We seem to have gone through some sort of “B&B” time warp, as Hope, who just announced her pregnancy a few weeks ago, was having a baby shower and showing a substantial bump. Thoughts:

Subtle, real subtle.
So Wyatt and Hope both stopped in separately at Liam’s house to chew over the romantic boat ride with Ivy. Wyatt basically wanted to know if they hooked up afterward and sealed the deal, and Hope, much to her surprise, learned that Liam had told Ivy he loved her. After she digested that news she did a convincing routine on being happy for him, and then let him feel her bump. A little nod to those who still believe the baby might somehow be Liam’s.

Sleep with one eye open.
The conversation between Liam and Deacon at the warehouse was a highlight of the week. Deacon has some of the best one-liners and delivery!

No men folk allowed.
Those who anticipated that the baby shower would mean an excess of giggling and high-pitched squealing were certainly not disappointed – and that was just Hope. Her voice was about three octaves higher than normal for the occasion. We love a good gathering, and at this one the highlights were the quick snipe between Caroline and Maya, and Quinn lurking, fondling and sniffing things…not to mention stealing that huge slab of cake. Was anyone else somewhat concerned when she picked up the knife?

The good son.
It's so good to see Bill back in his chair dictating to all and sundry. As mentioned in last week's "B&B" Breakdown, Bill was straight with Katie about her ring string, and in this instance, he decreed that Wyatt should take out a restraining order on his mother. These were good scenes as Bill was supportive and Wyatt showed his resolve to do what needed to be done even as he struggled with having to go to that extreme.

Off my property!
Friday was a lot of foreshadowing about something happening to Hope at Quinn's hand. Hope even met Liam at Brooke's place instead of his own house, presumably because the setting had stairs. Of course most were thinking Quinn would push Hope down the steps, or she would fall while they were arguing, but in a twist, Hope lost her balance all on her own. Liam is on route and will not believe that Quinn is completely innocent - no one will except maybe Deacon - so that will have to play out. Quinn made many feel for her this week with her fantasies, quiet pain, and heartfelt appeals. Vote in Soaps.com's B&B Poll: Do you feel bad for Quinn?