Reintroducing The Bold and the Beautiful’s Spencer Family

After Caroline’s death, it was revealed that Bill had another daughter, Caroline’s twin, who was kidnapped at birth and unbeknownst to Bill, grew up in Texas living under the name Faith Roberts.

Margo enlisted Taylor’s ex-husband Blake Hayes to track Bill’s other daughter down and Karen Spencer came to town. Upon meeting her, Ridge began to fall in love with this ex’s twin, but he was married to Taylor at the time and nothing came from their relationship. Karen also fell in love with Thorne, which resulted in Thorne and Macy breaking up. However, this relationship didn’t last either and Karen then moved on to Connor Davis.

Karen was also in involved with Spectra Fashions and after her engagement to Connor was broken, she returned to Texas to visit with her mother.

As for Bill Spencer, Jr., not much is known about him, as he has not been mentioned in the past and is a newly created character. According to some reports, he will be working for his father’s company and have a thing for Donna.

Feel free to fill in the blanks on the Spencer family history or share your thoughts about the return of this legacy family to B&B with Soaps.com below. 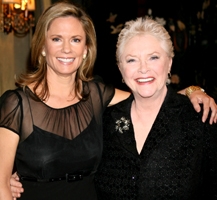 With Karen Spencer returning to B&B on April 28 and Bill Spencer, Jr., hitting town on May 12 (read more about that here) Soaps.com thought we’d give fans a brief reminder of who the Spencers are.

Before Ridge found his destiny in Brooke, he was in love with Caroline Spencer. Of course there were many obstacles on their way to wedded bliss, including Brooke, as well as Ridge’s brother Thorne, whom Caroline was briefly married to. Sadly, shortly after she and Ridge finally tied the knot, Caroline died from leukemia.

Caroline’s father, Bill Spencer, Sr., was a publishing tycoon and raised his daughter as a single parent after her mother passed away. Bill was not happy about Ridge and Caroline’s relationship and did everything in his power to break them up.

The Bold and the Beautiful Video Clip: Joanna Johnson on the Set!