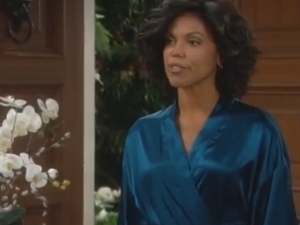 The week ran the gamut from melodramatic after Maya dropped her bomb, to light and fun with the Halloween bash to finish off. Thoughts:

Maximum effect.
While Maya may have felt some genuine outrage on Rick’s behalf, Carter was correct that she mostly set out to further her own agenda when she leveled her accusations, which were actually only suspicions, at Ridge and Caroline. She went for maximum effect, absolutely, and achieved maximum damage. When Maya was in the cabin with Rick and he declared his marriage was over, even she seemed surprised by how quickly and effectively her plan had delivered the desired result!

Theatrics.
Some were taken aback by Caroline immediately caving, crying and admitting to kissing Ridge. We know she had a guilty conscience, but this hardly seemed like the same person who schemed with Rafael and who warned Maya about messing with her husband after the sauna incident. As for Rick, stomping his foot and hollering at Ridge, “He’s not your father,” wasn’t his best moment. Ridge, meanwhile, displayed his potential for excessive arrogance by condescendingly referring to his brother as ‘Little Ricky’ and sneering that he’d ‘get over it’ after it was revealed he’d fooled around with the guy’s wife. Ack. If these are the people Eric’s counting on to take Forrester Creations into the future, perhaps he should re-think getting on the horn to Felicia and Thorne.

Of all people.
Maybe this show should be renamed ‘The Hot and the Hypocritical’. There couldn’t be a more eye-popping double-standard than Hope being confrontational about Caroline’s actions. Kissing one brother behind the other brother’s back is a regular occurrence in her world! If anything she should be the most understanding. She has no room to judge. Ivy’s take on it all – kind of appalled and declaring herself too new to the company to take sides, would have been quite refreshing had she not recently been so vocal about Hope and her men. She had no qualms about expressing an opinion then.

We are not fine.
Uh oh. Ridge thought he was going to smooth things over with love-blind Katie; pat her on the head and move on like nothing had happened - again, so arrogant. He may not see himself as being like Bill, but he sure did a darn good imitation this week. Poor Katie. As mentioned in last week's "B&B" Breakdown, devilish Donna’s predictions came true.

Reversal of fortune.
Ridge's run as CEO was spectacularly short and you couldn't help but feel that having the rug pulled out from under him was just desserts.

Turn to me.
The magic that led to people rooting for Rick and Maya in the first place came from her being such a genuine person that the differences in their backgrounds and the unlikeliness of them as a couple became meaningless. Now that she's being portrayed as a bitter, pushy person with dollar signs in her eyes, it's not the same and he seems better with Caroline. Although, Caroline only kissed Ridge, and Rick jumped right into bed with Maya, so maybe Caroline deserves better. With all of that said, the confrontation scenes at Brooke's house were intense, with neither Caroline, Maya, nor Rick giving an inch on their positions. How about that Maya pushing Rick to gobble up all the riches that go along with the CEO position on Friday? Vote in Soaps.com's B&B Poll: Who should Rick be with?

Big Brother Halloween.
It really was fun to have the more light-hearted burgeoning romance of Liam and Ivy featured amidst the antics of the Halloween bash as a contrast to the heavier drama taking place most of the week. Having the "Big Brother" houseguests there was probably an added perk for those who watch that show, but I'd rather have seen "B&B" characters such as Oliver. Anyway, Ivy and Liam may not be the most exciting couple around, but they're undeniably cute together.