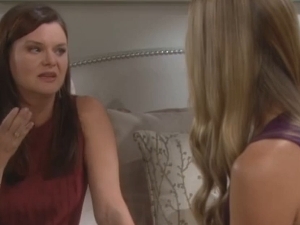 It was an eventful week full of all the elements that make a great soap on “B&B.” Thoughts:

It’s her or me.
It’s not too difficult to pick sides on this one. Quinn’s just done too many crazy/scary things – no one in their right mind would want her around their child or their father for that matter. In fact, the whole debate is faintly ridiculous considering that Quinn should actually be locked up – either in jail or a mental facility. By the way, what happened to the Ricardo Montemayor investigation? In any case, one thing many enjoy about the Hope character is her relationship with Deacon. While he’s an adult and can see who he wants, Hope has issued an ultimatum he can’t ignore.

Diamonds.
There’s no denying that Deacon and Quinn’s sexually-charged scenes and banter are entertaining. Unfortunately, if Deacon wants to turn his life around and be a better man, holing up and playing Fifty Shades of Grey with the town pariah maybe isn’t the best way to go about it. It will be interesting to see where they go with this pairing as far as what sort of influence one will have over the other, and whose influence will prove to be, ahem, dominant.

Feeling the collaboration.
Ridge threw his pencil, and caution, to the wind when he grabbed Caroline and kissed her passionately in the cabin. While this isn’t really a pairing many envision as a legitimate couple sharing their lives together, when he was close up behind her, smelling her hair, it wasn’t a stretch to imagine them making mad passionate love. Such breathtaking sensuality in their scenes. Gah.

Gold-digger.
Carter and Maya getting into it at every opportunity about her gunning for Rick's marriage has been ten times as much fun as their romance ever was. They really riff off each other amazingly! Maya injected a bit of a softer truth in there too by admitting she didn't mean to hurt Carter and that she was surprised to find she still had so many feelings for Rick - made her seem a little less manipulative and more human again.

Nipped in the bud.
Katie and Donna's conversation was so funny. Every time Katie assured Donna that nothing happened between Caroline and Ridge, Donna was like that little devil on one's shoulder, "But are you sure?" Loved it. They should use Donna more. It was also nice that they touched on Eric not rekindling his relationship with Donna. It still doesn't make any more sense than it did before, but at least they didn't continue to ignore it.

Behind your back...and on hers!
Wow, Maya just let a bomb go in the boardroom by blurting that Caroline and Ridge were having an affair. Excellent soapy fare! All the faces and reactions were just perfection as the semi-guilty parties gaped in horror. As mentioned in last week's "B&B" Breakdown, Caroline was in a tizzy over her fantasies and in the face of Maya's public accusation, she crumbled like a cookie. What do you think should happen next? Vote in Soaps.com's B&B Poll: Should Rick forgive Caroline?