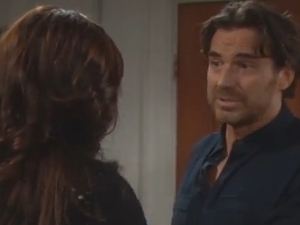 There wasn’t as much movement in the storylines this week as in some, but there was still plenty to discuss. Thoughts:

Doesn’t play well with others.
It seemed like Eric saying this to Ridge was a bit of foreshadowing. If Ridge gets his way and becomes CEO it probably won’t be good for anyone but him and maybe the couture division.

Once in a lifetime.
Poor Caroline all in a tizzy over her fantasies and wanting to be stoned in the town square. And Ridge using it to his advantage. Or is he using her? It may have started out that way, and to be honest the idea was kind of tainting the chemistry between them, but wait – at week’s end Ridge kissed Katie and her face changed to Caroline’s. Is he developing real feelings for her? Vote in Soaps.com’s B&B Poll: Is Ridge using Caroline?

Blah, blah, blah.
Why haven’t Ally or Liam ever asked Hope why she married Wyatt three seconds after Liam didn’t show at the Eiffel Tower? She didn’t have to marry him, she didn’t have to do anything, and she shouldn’t have married him if he was second choice, which is how they’re making it out to be now. Hope wringing her hands and wondering how this happened is exasperating. It happened because you married Wyatt and had unprotected sex with him. Next question! The endless repetitive conversations surrounding Hope and Liam are just agonizing to sit through anymore.

Forgiveness.
Speaking of repetitive conversations, Quinn was like a broken record this week showing up at the beach house time and again to have variations on the same argument with either Wyatt, Hope, or both. At least it has comical moments, such as her insisting wholeheartedly that she's not a controlling b**** of a parent. Um, yes you pretty much are!

Moving on.
Liam and Ivy have a really nice vibe together, but if Liam's idea of having fun is to invite her over to talk about her father all night, she might want to keep her options open. Thankfully they got to making out later in the date because until then they were firmly in the running for 'most boring couple'.

Caroline's confession.
Ivy must wonder what kind of hotbed of scandal she's come to work in at Forrester now that Caroline admitted she kissed her husband's brother and rival. "Too much information!"

You're out too.
It's fun that Quinn thinks she's working Deacon, but he sees it for what it is, and what he can get out of it. As mentioned in last week's B&B Breakdown, while their relationship was a secret, Quinn had something to hold over Deacon, so at least he's eliminated that issue. Hope's reaction to him bringing Quinn out as his girlfriend was quite enjoyable. He's in a sticky spot now though as he's about to be banned by association!