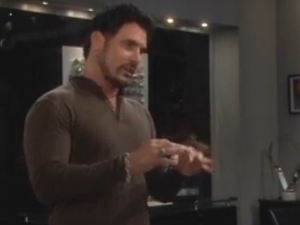 Only one episode of “B&B” surrounding the Hope stuff this week – so nice to see storytelling involving other characters and circumstances. Thoughts:

Things could get ugly.
First of all it’s a wonder no one has thought of actually following through on charging Quinn so she’d be locked up for a while, but what fun would that be, right? So now she’s threatening Hope, which most can’t really get too worked up about. No one really believes for a minute that the chosen one would be made to suffer at the hands of Quinn or anyone else. I had to wonder why Wyatt seemed so surprised that Quinn threatened Hope – really? After everything his mother’s done he should have had her committed by now. Quinn turning seriously nasty when not getting her way isn’t exactly a shocking new development. It remains to be seen if Deacon can successfully temper the situation or if he’ll find himself exiled as well due to his association with Quinn.

Two wrongs make a right.
We’ll see, Deacon. The minute he told Quinn they had to keep their relationship a secret, she had something to hold over him. Considering how hard he fought to get back in Hope’s life, consorting with the enemy and keeping secrets probably isn’t the best way to maintain his good standing.

Pam’s cupcakes.
As mentioned in last week’s B&B Breakdown, John Forrester really has presence and certainly shook things up for a couple of days. His visit will reverberate if Eric steps down to go live like his brother. John’s comic relief was a nice addition to the mix, especially him ticking Charlie off by flirting with Pam and later falling asleep while Liam droned on about his life and how terrific Ivy is. Hilarious.

Gossip girl.
Maya spent the week watching the little tidbits she’d been planting take root and blossom into full-blown distrust. Who else laughed when Carter protested that Ridge was a moral person? What about Othello showing up out of the blue and backing up Maya’s twisted view of things? What was that all about?

The delays are temporary.
Donna visited Katie long enough to put a negative slant on her love life and then left. Too funny. Donna really needs to get a life of her own. Preferably as a siren again - she was so fun back in the day. That's been missing.

I can smell the jealousy.
Baha! Bill's straight talk to Katie was quite entertaining. He even softened it with an apology at the end. These two are getting closer with Brooke out of the equation and Ridge the dressmaker distracted.

A little racy.
From the moment Caroline told Ridge to go ahead and 'use her', things got hotter and hotter between them. Not to mention how heated things got when Caroline defended her great and powerful mentor to her jealous husband. The chemistry between Ridge and Caroline is pretty happening. From her fantasy in bed to her gazing up at him in very close proximity at the office, to the passionate kiss at week's end...yowza! Where do you stand? Vote in Soaps.com's B&B Poll: Caroline and Ridge?

Stepping down.
I have to say it was a groan-worthy moment when Eric announced that he was stepping down (yes again) and one of his sons would take his place. Gah. This instantly took us back to the ridiculousness of Rick and Thomas competing - been there done that. If Eric doesn't know by now who is the best man to be his successor he's certainly not going to find out by checking with Ivy and Caroline. Silliness!