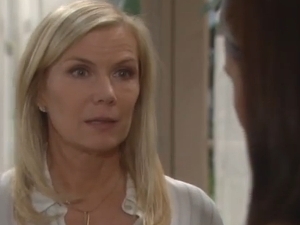 “The Bold and the Beautiful” for the week of September 29 – October 3:

It was a solid week given that not everything was about Hope’s situation, so viewers got to see other characters, and a new one – welcome John Forrester! Thoughts:

Out of the equation.
“I’m taking myself out of the equation” was Brooke’s catchphrase of the week. She started things off by unceremoniously dashing Deacon’s dreams of a reconciliation, and then put Bill on hold for the umpteenth time while she rushed over to discuss the situation with Eric of all people. Conveniently, a huge crisis had developed at the Milan office of Forrester Creations, which inspired Brooke to start talking like a self-help book and decide to ‘remove herself from the equation’ by relocating overseas. It’s more than a stretch to believe Brooke would put anything before her destiny, aka, current lover, but there it is.

Call 911!
That Katie can really bring the realistic panic and tears. Gah! Seeing Bill and Katie work together to save Will from choking, and interact as a family, played into Brooke’s decision to ‘remove herself from the equation’ as well. I couldn’t help thinking it’s just a tad presumptuous for Brooke to decide what’s best for them, particularly since Katie is engaged to Ridge. Hehe. Why didn’t Katie immediately suspect that Brooke had some sort of plan to get Ridge back when she announced that Katie needed to reconcile with Bill? What do you think? Vote in Soaps.com’s B&B Poll: Should Katie reconcile with Bill?

I’ll eat your pie, Quinn.
The sexual innuendo was alive and well over at the warehouse this week as Deacon offered to eat pie and plumb pipes before silencing eternally yappy Quinn with a deep kiss. While they may not be an ‘endgame’ couple, they are certainly a fun diversion. A dysfunctional and hot duo. Deacon also brought up Ricardo’s death, which it’s worth noting was kind of dropped – the investigator never came back to question Quinn. What’s up with that?

More to this story.
Liam does more work at Forrester than he ever does at Spencer it seems. He showed up as Ally and Ivy were once again embroiled in discussion about Hope and her life. Save us. Liam then met Ivy for lunch and proceeded to tell her Hope was pregnant with Wyatt's child. This was pretty wild, as this isn't his news to tell, and he also knew Hope still hadn't told Wyatt. Anyway, it ended up with him placing his hand over Ivy's and agreeing to go along to her family dinner.

Full speed ahead.
It's hard not to feel downright icky for Wyatt these days. Hope is constantly on the verge of tears over her sacrifice and putting on a brave face about making a family with her husband instead of Liam, and Wyatt can't even enjoy sharing the baby news with his mother because she's a psycho. It's all too bad for Wyatt, but no one can blame Hope for refusing to have Quinn around the baby. That said, confronting Quinn and trying to exile her from their lives could prove to be dangerous indeed. I could see Hope 'falling' down a flight of stairs, or even worse, Quinn making off with 'her' baby when it's born. Skeery!

Who loves ya'?
Wow that John Forrester really has presence...maybe it's the loud voice? Anyway, he's funny, and he got 'Chuck's' hackles raised more than once by flirting with Pam. So cute. Liam is also in his sights because he's spending time with Ivy. So awkward for Liam.

Designing drama.
As mentioned in last week's "B&B" Breakdown, Maya is trying to cause trouble between Rick and Caroline, and it will be interesting to see if she is even more successful now that Katie is having flashbacks to good times with Bill. That, combined with Ridge's preoccupation with Caroline and designing could help free Ridge up for an affair, which is just what Maya would like. Can't wait to see more of this storyline.