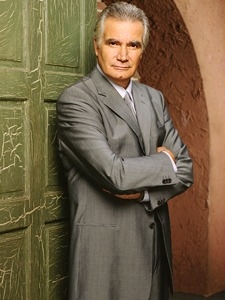 Result of an accident.

In this week’s “The Bold and the Beautiful” Throwback Thursday Soaps.com takes readers back to the early 1990s when Eric Forrester suffered temporary blindness…

Hope recently learned she was pregnant, and years ago Eric received a prognosis as well. Eric hasn’t always had good luck in the romance department. Not that there had ever been a lack of women in his life but outside forces and people always seemed to get tangled up with another, which prevented him from being happy for long. Eric had been married to Stephanie when sparks reignited between him and his high school love Beth Logan. Though he’d been drawn back to Stephanie when it was revealed their daughter Angela had died, he still opted for a divorce.

Stephanie had the last laugh and made sure Eric couldn’t move on with Beth, but she hadn’t imagined he would do the next best thing. Eric married Beth’s daughter Brooke and soon had a son with her. Rick almost died when he was little after a bookshelf came toppling down, but Eric took the brunt of the hit. Though he saved his son, he suffered temporary blindness from the accident and delayed in telling everyone when his sight returned.

Do you remember how everyone realized Eric’s sight had returned? Please post your answer from the choices below into our comment section.

How did everyone realize Eric had regained his sight?

– He was caught reading an article on Forrester out loud.
– He reached out and caught a vase that had fallen.
– Brooke saw him driving a car.
– Stephanie caught him writing a letter.
– Sally overheard him talking to his doctor.

Also, vote in our Genoa City Throwback Thursday poll surrounding Y&R’s Brad Carlton’s heart attack and read Soaps.com’s Where Are They Now column to learn how “As the World Turns” alums (ex-Jack and ex-Will) Michael Park and Jesse Soffer are reuniting in primetime.