Padded room.
Yes, Quinn probably should be in a padded room. In fact, we'll all be in padded rooms if Hope doesn't make a decision about her love life that sticks, and I mean soon. Let's go out on a limb and guess that Hope is pregnant (even Quinn alluded to a bond Liam Spencer couldn't break - could she know?) and will stay with Wyatt for that reason. This will not end the triangle, but only spur more endless debate about whether she actually would have left him for Liam if she hadn't been knocked-up. Save us.

And we have proof!
Loved the dramatics of the triumphant Charlie, super detective extraordinaire, and Pam sharing their evidence against Quinn with Brooke, Donna, and Deacon. Brooke and Deacon are operating a lot like a parental unit these days. Would you like to see them together? Vote in Soaps.com's B&B Poll: Brooke and Deacon. 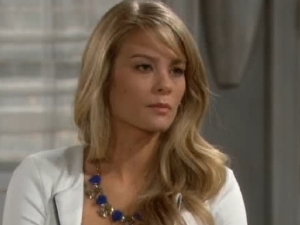 It was all about the Quinn reveal and the Hope/Liam/Wyatt triangle this week. Thoughts:

Gene pool issue.
The talk about Wyatt and Hope starting a family was secondary only to talk of whether or not Hope would let Quinn’s actions affect her marriage to Wyatt. Foreshadowing? Brooke seemed to call it when she theorized that Hope was making excuses not to have children with Wyatt because she wasn’t over Liam yet.

The brunettes have it.
Ivy said that at the end of the day, Hope ran off and married Wyatt. Quinn later called Hope out on the same grounds. Hope did not wait or make any effort to find out why Liam did not appear at the Eiffel Tower on time. She didn’t have to accept Wyatt’s proposal and marry him. In fact, she didn’t need to marry anyone at all. It would be refreshing if Liam – either before or after finding out what Quinn did – confronted Hope about her hasty decision. What was behind it? Did she truly deep down want an excuse to choose Wyatt, like Quinn believes, or did she just want to be married to someone and refused to wait any longer, so she married her second choice? You had better believe that Quinn needs to answer for her actions, but Hope accepting Wyatt’s proposal and agreeing to a quickie ceremony was actually a bigger deal insofar as the triangle is concerned. When Liam ran off and married Steffy in similar circumstances, Hope was appalled, so Quinn calling ‘Hope-For-The-Ever-Changing-Future’ out now that the tables are turned had many cheering.

State of being.
Ya’ gotta’ love how smooth Bill is. He went over to Liam’s clearly concerned that things weren’t going to go Liam’s way and to remind him that Hope is a married woman, but when confronted with Liam’s complaint that he favored Wyatt, managed to turn it all around to soothe Liam’s ruffled feathers. No doubt there was heartfelt truth in some of what Bill said to Liam, but the upshot was that he managed to make it look like he was on Liam’s side the whole time and never even came close to incriminating himself for knowing what Quinn had done and keeping her secret. Imagine if that came out!

The Bold And The Beautiful Spoiler Video: I Could Cry

The Bold And The Beautiful Spoiler Video: Jeopardy