B&B is in desperate need of a new restaurant! Il Giardino was the scene of four or five different lunches this week and I think Stephanie even made a comment to her kids about how often she goes there. It’s a good set, but I could use some variety regarding where they meet to discuss important things, as I’m sure Stephanie and her dining guests would enjoy the opportunity to choose items from a different menu.

Stephanie and Clarke had a nice scene talking about Sally this week. I was happy they acknowledged the fiery redhead and let us know she was somewhere fantastic enjoying life. I read an article awhile ago with Brad Bell (Exec. Producer) who said they would never kill Sally off because he wants to keep her spirit alive or something like that. I have to say I am totally onboard with that. Sally was a larger than life character, played by an amazing actress and it’s comforting to know she lives on.

The reveal of Stephanie at the fashion show was great and of course Bridget was a hit, but shouldn’t Brooke and Rick have been clued in to Bridget’s career as a fashion designer? She is Brooke’s daughter and Rick’s sister and they are still running Forrester, so this is important information for them. Why can’t people be in two storylines at one time? It’d be nice if they showed family connections at important moments like this one more often. Also, shouldn’t Ridge know his mother is working for the enemy?

Here’s a random thought: I get that it’s an advertising thing, but would the president of multi-million dollar Forrester Creations and the daughter of a lead designer and CEO of FC really register at Macy’s?

Those are my thoughts on what stood out for me this week. How about you? Please feel free to share your opinions below. 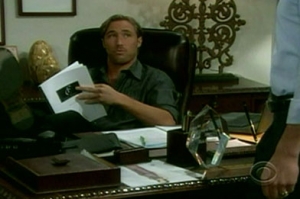 B&B Breakdown for the week of April 13!

So Rick admitted he really loves Steffy, but is just enjoying torturing Ridge, which, let’s face it, is really his end game. I have to wonder how much he could really love her if he talks about her like that to her parents though. I think he’s just delusional. He may have genuine feelings for Steffy, but clearly destroying Ridge trumps that and he doesn’t care how it affects the person he supposedly loves so much. Maybe Rick should join Thomas in therapy so they can work on their issues together. Then maybe he could complete going through Ridge’s family tree by realizing Thomas is the one he truly loves! Hey, why not? B&B could use some diversity.

While I’m a bit tired of hearing the same arguments between Ridge & Rick and Ridge & Brooke, and I think Brooke should open her eyes to her son’s behavior, I do like the fact that Ridge and Brooke aren’t completely imploding as a couple yet. It’s been going on for a while and I’ve said it before, but while they are on opposite sides of the issue, they aren’t lashing out at each other, sleeping with other people or yelling hateful things at each other. They still love each other, but are holding their own ground. This could certainly change, but for now I’m glad to see Ridge isn’t automatically turning to Taylor for love and Brooke isn’t crying on Nick’s shoulder.

The Bold and the Beautiful Video Clip Preview of Monday's Episode!