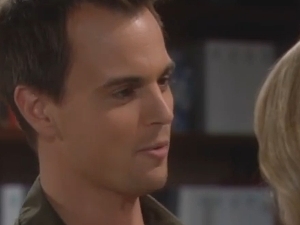 It was a quirky week on “B&B,” with some crazy, questionable things happening and some magic in the air. Thoughts:

Drop the cat off.
Really, though, what’s wrong with these people? While Ivy is bringing a fresh dynamic to the Hope/Wyatt/Liam stuff, frankly, it’s difficult to relate to, or root for any of them. Hope and Liam are sharing custody of a cat, Ivy wants a guy who clearly loves someone else, Hope always seems to want what she doesn’t have, Liam mooches around alternately sulking and kissing Ivy, and Wyatt, most bizarrely, wants to move Hope into the house she previously inhabited with Liam. Did his husband handbook not advise against this? Weirdos!

Keep your trap shut.
The theme of Bill and Quinn being so much alike continued this week as Bill confirmed he would keep Quinn’s secret, basically because it suited him to do so. It was kind of fun to see him growling at her about ‘no more games’, as though he was actually in control. Sorry, Bill, that’s just an illusion Quinn is allowing you to enjoy. Muahaha!

Not the jealous type.
We'll see if Katie becomes the jealous type once this 'magic' between Ridge and his new muse, Caroline, takes on a life of its own. In other news, Katie and Brooke had a teary reconciliation, and Carter traded insults with 'Mess Around Myrna', who strangely saw fit to let her ex-fiance in on her plans to break up Rick's marriage. Notably, this is the most interesting Carter and Maya have ever been! Later, down in the office, Rick had his hands full as Maya pawed him and pronounced him fair game so long as Caroline wasn't knocked up. Wow! By week's end, Maya had copped on to Caroline's burgeoning relationship with Ridge and had a glint in her eye about that. Look out, Caroline! Maya's a lean, mean, gold-digging machine.

Charlie's hunch.
How is Charlie existing merely as a security guard and Medieval Times enthusiast? Clearly the man is a super detective extraordinaire! The result of his impressive efforts this week was rock solid proof that Quinn had traveled to Paris and shoved Ivy into the Seine. He and Pam hightailed it over to Liam's place, where Ivy was conveniently visiting, and they filled them in. While it's kind of fun to see Quinn get caught, to wonder if she'll try to squirm out of it, and to see everyone's reactions, the specter of Hope flip-flopping again looms large and we really just want to smack Charlie for not letting the triangle die and stay dead. What would you like to see happen now that this secret is out? Let us know by voting in Soaps.com's B&B Poll: Should Hope return to Liam?