I'll show you mine.
Caroline was back oozing ooey-gooey love all over her hubby, Rick, and then promptly asked if Maya had been hitting on him while she was away. Probably a good thing she's not letting down her guard where Maya's concerned - the angel-turned-gold-digger seems to have a one track mind these days. Later, Caroline was the one distracted when designing god, Ridge, displayed more than a passing interest in her designs. Yep, she was very flattered by his attention, having no idea of course that she was actually the one helping him. How will this play out? Could they become romantically involved if they begin working closely together? Could you stomach it? Vote in Soaps.com's B&B Poll: A Ridge and Caroline romance?

Completely insane.
Isn't it a gas how Bill acts so outraged at the lengths Quinn will go to in order to manipulate outcomes for Wyatt? This is the guy who blackmailed a doctor to fake brain scans and tell Steffy and Liam that Steffy might die in order to keep them together. Quinn pushed Ivy off a bridge, Bill dumped Ridge out of a helicopter...hmm. Too funny!

The night's not over yet.
As mentioned last week, Ally seems to have defected to Team Ivy. Who else is loving Liam and Ivy together after yet another kiss? 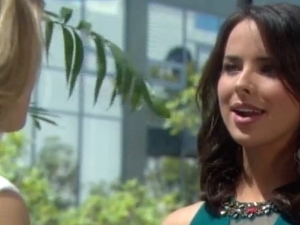 “The Bold and the Beautiful” for the week of September 1 – 5.

It was a short but busy week on “B&B.” Thoughts:

Slick.
Well things definitely went Deacon’s way when Hope joined him and Brooke in the kitchen, presenting him with the opportunity to show Brooke live and up close just what a functional little family unit the three of them could be. Brooke’s eyes narrowed very thoughtfully as she watched Deacon hug their daughter Hope. The wheels were turnin’…

Blood tells.
Just like that another Forrester/Logan rivalry was established between Ivy and Hope as they battled verbally over Liam. Of course it’s a rehash of Liam/Steffy/Hope complete with Liam saving Ivy from drowning as he did with Steffy in the bathtub, and yet, the verbal sparring between Hope and Ivy was still very satisfying. Perhaps because it’s been so long since Hope’s had anyone heap anything on her other than praise. Ivy didn’t shrink from speaking candidly to Hope and it was refreshing. Loved it.

Back off.
At home, Hope continued to air her grievances regarding her ex and Ivy to her new husband. Not surprisingly, Wyatt didn’t want to hear about it. Ack.

The Bold And The Beautiful Spoiler Video: Very Clear